The Quality of Quantity 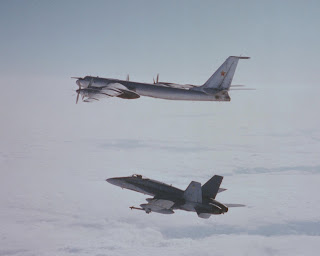 It's claimed that Soviet dictator, Joseph Stalin, quipped that, in matters military, quantity is a quality unto itself. Then again you don't have to be a Communist mass-murderer to know that.

When Allied armies landed in Normandy in 1944 they quickly found their Sherman tanks hopelessly outclassed by the German armour which was larger, more heavily armoured and more heavily gunned. The Germans came out way ahead on the kill/loss ratio. We lost far more tanks but we had far more tanks, enough that we managed to swarm the defender's armour and destroy it.

Which brings us to the search for a new fighter aircraft for the Royal Canadian Air Force.

Harper wanted to sign Canada on for the Lockheed-Martin, F-35 stealth light bomber. His plan was to equip the RCAF with about 60 F-35s. Out of that force about 15-20 would be hangared, held in reserve. Of the remaining 40 or so, probably 25 to 30 would be available at any given time, the others in for maintenance and repair. Now when you've got the second largest territory in the world, including vast unpopulated areas with challenging climate issues, that's not a lot of airplanes. When you consider that this vast, northern frontier is paralleled by the vast, northern frontier of our NATO adversary, Russia, those numbers of Canadian fighters seem minuscule.

The story got out yesterday that the Trudeau government will opt to replace our aging McDonnell Douglas CF/A-18A Hornet fighters with Boeing F/A-18E Super Hornet fighters.

Pierre Trudeau's government bought Canada the first batch of CF-18s, 138 in total. He got them at a good price as Canada was the first export customer. We even had an option (never exercised) for another hundred or so at the introductory price.

Those CF-18s have been. hands down, the most successful combat aircraft Canada has fielded since the end of WWII. Whether the 18Es will make the best replacement for the aging 18As is debatable although Australia just ordered another batch and the US Navy is continuing to buy them.

What hasn't been addressed is what we intend to do with them, the answer to which will indicate how many we need. Harper was big on sending CF-18s abroad in "penny packet" missions of 6-aircraft. We had a penny packet in the air campaign against ISIS. We still have a penny packet boring holes in the sky over the Baltic states. We also have fighters based at Cold Lake, Alberta, and Bagotville, Quebec, on NORAD duty.

The old numbers seemed more or less sufficient while the Arctic airspace was a dead zone where, every now and then, a Russian Bear bomber would put in an appearance just outside of our airspace. That is in the process of changing as Putin re-militarizes the Russian Arctic zone even as the Arctic sea ice steadily vanishes, inviting additional marine and naval activity in the polar region. It's becoming a brand new deal in the far north unlike anything we've known before.

There's really no way to know with any certainty what Canada's defence needs in the far north will be and the fighter choice has to reflect that vague future. Harjit Sajjan may be thinking of following Australia's approach of an interim buy of perhaps 60 of the updated F-18s now to be followed by something else later on as a clearer picture of our defence posture emerges. There are signs that the Americans could have something better than the F-35 by 2030, a new design that incorporates the best of the F-35 but leaves the considerable flaws behind. That might be Canada's best bet.

Slightly off topic but we have spent the last decade hearing about how Harper was the saviour of the Canadian Armed Forces which Pierre Trudeau had sent into a nose dive. Here's the truth no Conservative wants to read.
Posted by The Mound of Sound at 12:30 PM

.. what Canadians need to read, aside from your excellent article, is the link to estpritdecorps at the very end.. That aside, i struggle with the description that almost always accompanies Stephen Harper - as 'Conservative' .. Now why is that? Yes yes.. he made his deal with Peter McKay.. and adopted, then adapted the Brand.. presumably because there was nothing 'progressive' whatsover to his personal ideology. He really should have just called it The Harper Party.. that's what it was.. and the Harper Rump remnants still caterwaul and pose as 'tories' without him. Its like pretending cheap single ply toilet paper is also paper towel.. and ok to flush.. and nutritious when wrapped around baloney and toasted.. There was nothing about Harper, Ray Novak & Arthur Hamilton that was nutritious or good for consumption, progressive or conservative.. there was and is a lot that had a nasty taint (OK, a slathering) of evangelism, fraud, ego, arrogance, secrecy, deceit and legal obstruction via thousands of lawyers.. yes, thousands.

We need to rebuild our Coast Guard, whatever Navy we can manage, same with our Air Force.. gawd knows the state of our peacekeeping or humanitorian capability.. and our Diplomatic Corps.. our military, especially at the senior level is decimated.. and I don't even want to mention the RCMP .. After 10 bitter years under the creep named Harper, there's some sadass legacy.. but hey, we have some videos of him howling a few Beatle tunes.. massacering Sweet Caroline and a few f'n pandas in a zoo


@ Sal, those knowledgeable in these things, such as the King's College, London crowd, believe that military activity is going to increase substantially as this century unfolds. Some of it will be warfighting, unfortunately, but a lot of it will be security - preventing migrations, that sort of thing.

We don't have to like it but we have to accept that even Canada will have military needs that we haven't known for generations.

The US and other militaries are preparing for climate driven wars. Is Canada's military even aware that it could be called upon to protect our borders and coastlines? Is our federal government?

.. no arguement there, Mound.. as you said in a previous essay.. we are entering uncharted territory. We will have to either be proactive or reactive. But aside from NORAD or NATO 'obligations' I wonder that we are not building up affordable maritime patrol capability. both naval and air. That could be on the lines of the Coast Guard hovercraft and rapid response choppers both land based & on small coastal patrol vessels.. Its not clear to me who we'll need to strafe or drop bomblets on domestically.. notwithstanding the odd views of ol Joe Oliver or Jason Kenney who seem to fear for their scalps (probably for good reason) We both know that modern warfare commences wth taking out runways, hangers, maintenance, radar, ground to air missile control, command & communications.. thus the Prowler E6 & light Harpoon style weaponry etc.. It matters not, if you can't protect it, hide it, refuel it or maintain it.. this basic stuff is programmed into every military ops plan & ops orders as fundamental prelim stuff.. Canada is minor league.. our 'Royal' navy a fine example.. What 'deterrant' our submarine force provides is pretty eloquent.. basically frightening the shite out of nobody from drydocks .. some dories with a half dozen Canadian commandos or reservists likely more useful. We are likely the 'last rdoubt' Mound .. the high n dry ground where the disinherited will head when war, famine, drought & the Donald strike.. That's something for young middle aged J Trudeau to contemplate.. aged f'twit 'economists' like S Harper.. or provincial premiers contemplating 'feeding' the Chinese economy.. especially the one promising an LNG unicorn & shiny pony in every pot ..


@ Toby - I'd be surprised if Canadian defence planners were not well versed on the problems. That said, with today's reluctance to fund much less bolster Canada's military I doubt that the problem has gotten out of the planning stage. Canada would probably have to alter force structures and equipment programmes before the forces were in any position to effectively respond to climate-related threats.


It is something, Sal, for such an obvious prize - Canada - to be so poorly safeguarded. Yet it's not a topic of public debate so it's hard to imagine that will change anytime soon.

Canada's geography is I think long been assumed to be a free deterrent. Defending it properly is expensive for a small country with a small armed forces. Even the Australians, who take their own continental defence a bit more seriously, would be hard pressed to fend off an invader with enough muscle to establish a robust beachhead somewhere. Canada so far has an ally to the South and vast territory to the North. This picture could well change when climate change makes the Arctic more navigable and such.

Boris said... ' "Canada's geography is I think long been assumed to be a free deterrent." Add to that the assumption that the US will protect us. That is the way it has been for long enough that few look seriously at the problem of, say, 600,000,000 climate refugees on the move. Include in that mix armed militias determined to make Canada their home by force if necessary. We have a lot of coastline and back door entries. Canada's military is definitely not ready for any sort of new reality but that's not new; generals always start out trying to fight the previous war.

Global warming war and the existential battle over arable, livable land may have already begun. The Syrian war is said to have been facilitated by drought due to climate change. But I would argue that the stakes may be much higher and that the Saudi royal family, knowing that their kingdom will soon be uninhabitable, have sent their Wahhabi ISIL jihadists to fight and prepare the way for their eventual arrival. May seem far fetched but if you knew what was coming, which surely they must seeing that their oil has caused it, would you wait around to loose everything else? A lesson for Canada?

Unfortunately, Boris, the "free deterrent" of the far north may have been erased by Russia's new Kh-101/102 long range stealth cruise missile which, by most estimates, could reach Washington, D.C. from any point just our side of the North Pole. That's what you call a standoff weapon and the Bear can carry eight of them under its wings.

It's generally thought to have an astonishing range of about 3,400 mi. but some think it could lead to a 6,000 mi. range missile before long.

A barrage or "swarm" of those things would be pretty hard to defeat, especially if you have just a small number of defenders.