The Senate of Canada - Back on the Job. 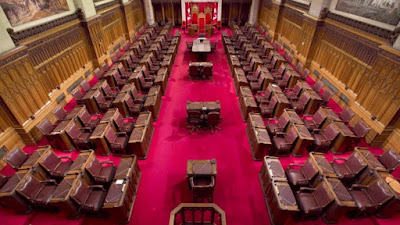 To some they're still unelected meddlers who should just sit down and rubber stamp the government's assisted dying law, just as they would have done during the Harper "shut up and do what I say, when I say it" era.

That's not their job. Freed from the yoke of an iron fisted prime minister, the Senate is doing its job. It is providing "sober second thought" to the massively flawed Liberal assisted dying bill.

Unlike the prime minister and his cabinet, the senators can understand the plain words of the Supreme Court of Canada in the Carter decision. They understand the rule of law. They realize that Charter protections aren't something the government can withdraw or rescind to suit political expedience. They know it's not their job to look the other way and pass unconstitutional bills.

And so the Senate is doing its job. Our senators are amending the flawed legislation to bring it into accordance with the law of the land. Justice minister Jody doesn't much like that. She thinks her bill appropriately compromises the Charter protections of the terminally ill. She thinks that Charter rights are something for the government to manipulate, to "balance" as it deems politically expedient.

The Senate has already passed one amendment to the bill. More are in the works. It's probably best to review them at the end when we can see what the law should look like. For now, however, they seem to be doing precisely what Canada's senators are supposed to be doing.

As counterintuitive as it may seem, a more independent Senate may force more democracy (and collegiality) on the House of Commons: What is certain is that Bill C-14 gave the maligned upper house a much-needed opportunity to shine in a capacity other than that of parliamentary villain. The high calibre of its deliberations confounded many of its critics.

For the first time in years, the upper house earned some truly positive coverage.

It is early days but, based on the assisted-death debate, it is possible to postulate that the more the Liberal government uses its majority to truncate debate in the Commons, the more scrutiny it can expect in the Senate. To earn the respect of a less partisan upper house, the government may have to show more respect to due process in the House of Commons.

Good to see the Senate doing its job, but I'm suspicious of the amendments we haven't heard of yet.

You may recall that Justice Minister Jody Wilson-Raybould hosted a $500-a-plate dinner at Torys LLP on April 7. The Cons asked Ethics Commissioner Mary Dawson to look into the propriety of that. When Ms. Dawson does get around to that I hope she looks at the following timeline:

February 25, 2016 - the Special Joint Committee on Physician-Assisted Dying tables its report in the House outlining how the Carter decision can be fully implemented.

May 14, 2016 - Jody Wilson-Raybould introduces Bill C-14 in the House, which fails to follow the recommendations of the Special Joint Ctee.

I wonder what meetings the Justice Minister set up at that dinner, and with whom.


Well, Cap, I have to say I find Ms. Wilson-Raybould a bit underwhelming. My impression is that she either skipped a few classes at law school or Canadian constitutional law is no longer a required course at UBC.

"Sober second thought" is really an ignorant expression. Historically, this was a euphemism for the upper class having control over democratic government.

But it looks like Justin Trudeau's half-way senate reform is turning out to be a good idea. He took what was nonsense and turned it into something with a purpose.

Unfortunately for poor Justin, he just made his job a lot harder.

BTW, this blog should read: "Senate of Canada - First Day on the Job"