If It Sounds Too Good to Be True... Returning CO2 to the Stone Age


It's a fairly exciting breakthrough, if it's the real thing. In an Icelandic volcanic rock field, compressed CO2 was pumped underground. Just two years later the researchers found that CO2 had turned to rock.

The idea is that CO2 and basalt combine to form carbonates, the precursor to limestone.

It sounds great provided you have the source of your CO2 in the vicinity of a basalt basin. British Columbia has the Chilcotin Group shown in grey in the chart below. Similar fields exist in Washington and Oregon. 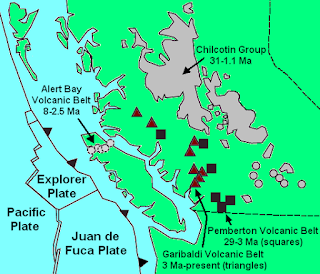 Is it the miracle cure? Probably not. The Icelandic project is scaling up, hoping to permanently sequester 10,000 tonnes of CO2 a year. The problem to be solved, however, entails hundreds of millions of tonnes of carbon dioxide per year.

The red triangles that parallel the coast are British Columbia's Pemberton and Garibaldi Volcanic Belts that offer the promise of vast amounts of clean, geothermal power - if the political will is ever found to exploit them, something the fossil fuelers won't take lightly.
Posted by The Mound of Sound at 7:10 AM

Mound, this is like trying to treat diarrhea with a diaper; it doesn't fix the problem. Worse, it gives carbon polluters another excuse to keep making their mess.

Anyong said....According to Medicine Hat's Major, CO2 is not the problem with Climate Change. He doesn't like Notley's carbon tax. And, well, the climate changes all the time. Great logic! Medicine Hat is building a big new gas turbine for future energy. Crumbs!!

Getting rid of CO2 doesn't get rid of other pollutants that are also causing Climate Change.