When the Flood Waters Recede 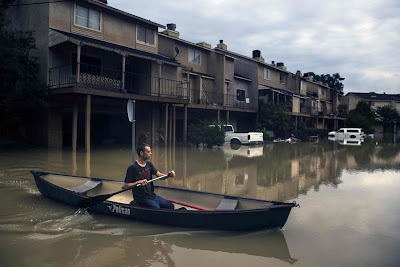 Severe flooding is here to stay. There's no way to fix it. We have warmed the atmosphere (with more of that to come) and that means the air can hold increasing amounts of water vapour (itself a powerful greenhouse gas). This generates severe storm events of increasing frequency, intensity and duration. Where it still rains it tends to rain harder than it did before, a lot harder. Storms deliver more rain than before.

In recent days there have been many reports of the floods ravaging Texas and Europe. The floods have claimed lives, caused an incredible amount of damage. Yet some of the worst, most lasting damage we can't really see, even after the flood waters recede. What those flood waters take with them is an awful lot of topsoil on a one way trip downstream to some lake bed or ocean.

When we fished for salmon at the mouth of the Fraser River there was this huge area of brown water. That was topsoil being carried by the Fraser out to sea. Flooding does exactly the same thing only on a far greater scale.

There are situations were flooding actually improves agriculture. For thousands of years Egyptian farmers have depended on the annual Nile floods to deposit silt onto their fields. That's topsoil moved from upstream to downstream. 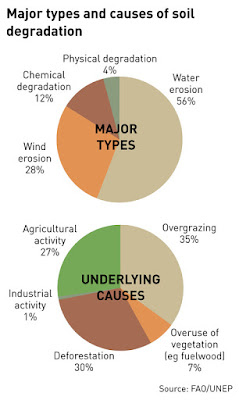 The sort of flash flooding hammering Texas and Europe, however, strips topsoil and leaves the land depleted.

The study, "Soil Erosion: A Food and Environmental Threat," draws upon statistics on soil erosion from more than 125 sources. Here are some of the key findings:

As a result of erosion over the past 40 years, 30 percent of the world's arable land has become unproductive.
About 60 percent of soil that is washed away ends up in rivers, streams and lakes, increasing the risks of flooding and intensifying water contamination from fertilizers and pesticides runoff.

In 1994, a study by Pimentel and Giampietro, found that "During the past 40 years nearly one-third of the world's cropland (1.5 billion hectares) has been abandoned because of soil erosion and degradation."  That's 20+ years ago, well before we began experiencing the climate change impacts we have today.

This is a knock-on effect of flooding. Soil degradation, in turn, has its own knock-on effects including water contamination - the toxic algae blooms that beset lakes including Lake Winnipeg and Lake Erie - and the worsening of coastal dead zones such as the devastation of inland fisheries in the Gulf of Mexico.

I am as amazed as I am dismayed that this problem, no, this massive threat, receives so little notice by both the public and their governments. In 2014 the UN Food and Agriculture Organization digested all the research (there's plenty) and issued a warning that mankind has 60 years of farmland remaining. At the rate we're degrading our farmland, most of it will be sterile within 60-years.

Here's the thing. If some foreign power was inflicting on us the damage to our ecosystems we're inflicting on ourselves and our heirs, we'd probably be at war. There are ways to rehabilitate our farmland, to bolster it against our excesses and, now, nature's to boot. The thing is it's not without cost and it takes a lot of time to implement. If we're going to start making the situation better we have to stop making it worse. That begins by putting a national soils programme on our government's "To Do" list, preferably somewhere near the top.

The cost thing is the issue. In a neo-liberal world, those who can afford it can always get their food from somewhere else. What happens to the rest of us is not seen as their problem and won't until we arrive at their doorsteps waving pitchforks.

Yes mound! Do you have your pitchfork ready?