Does Europe Offer a Glimpse Into Our Future? Is the Old Political Dynamic Passing Away? 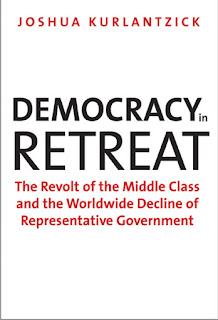 The mass support shown for Bernie Sanders and Donald Trump has been a measure of the powerful disaffection among the American public. Both are/were anti-establishment figures who spoke to public discontent with their mainstream political parties.

Something similar seems to be underway in Europe. An article from The Guardian suggests a broad-based discontent, from the far left to the far right and everything in between has "mainstream parties in full retreat."


The concerns of many may be broadly the same: immigration, integration, jobs, incomes, the EU, political and business elites. The euro crisis, followed by Europe’s migrant crisis and the Paris and Brussels terror attacks have fuelled their rise.

But their ideological roots are very different: from anti-establishment to neo-fascist, nationalist to anti-austerity, authoritarian to populist, libertarian to Catholic ultra-conservative.

Germany’s AfD is not Hungary’s Fidesz. The Finns and the Danish People’s party loathe France’s Front National, and the Netherlands’ PVV is nothing like Poland’s Law and Justice, which bears no resemblance to Austria’s Freedom party. It may be misleading to bracket them all together in the same category.

What is undeniably happening, however, is that the continent’s traditional mainstream parties are in full retreat. Across Europe, the centre-left social democrats and centre-right Christian democrats who have dominated national politics for 60 years are in decline.

Following a collapse in support for its two centrist parties last December, Spain has been unable to form a government and will hold fresh elections next month. The three mainstream parties in the Netherlands are set to win 40% of the vote between them in elections next year – roughly what any one of them might have got previously.

Even in Germany, it seems highly likely that support for liberal and green parties and, above all, the populist, anti-immigrant AfD, could soon bring to an end an era of two-party political stability that has endured since the end of the second world war.

Is the old political apparatus also failing us in Canada? To me it does seem so, quite clearly. From globalization and the surrender of state sovereignty to inequality and the rise of corporatism to the environment and climate change our governments no longer seem to be acting in the public interest. It's as though representative democracy has atrophied under the governance of our mainstream parties. We are no longer led. Today we are ruled, administered by visionless technocrats who fiddle with this and meddle with that to no coherent end. Perhaps it is just a symptom of some greater malady looming. Who can tell?
Posted by The Mound of Sound at 7:38 AM

"We are no longer lead. Today we are ruled." That says it all Mound. Our governments are becoming authoritarian and democracy means nothing to them.What I find frightening about Trudeau is that he seems oblivious to this.


Trudeau is essentially mainstream in his politics, Pamela. Hesitant, nothing out of the ordinary. He's not the visionary that we had in the previous Trudeau. Then again a lot of Canadians begrudged PET his vision, wanting the country to be left alone - as it was.