Making Sure Connie Can't Give Them the Slip, Except He Might Have Already 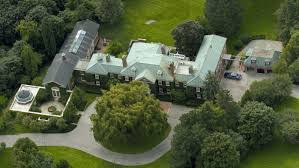 Is he still Lord Black of Crossharbour? Doesn't really matter. The Canada Revenue Agency has slapped a lien on Conrad Black's Toronto mansion to secure the $31-million he apparently owes in Canadian and U.S. taxes.

Documents filed in Federal Court proceedings related to the liens reveal that Mr. Black, who gave up his Canadian citizenship to sit in the British House of Lords, has little money left in his Canadian bank accounts and has made no attempt to renew a temporary residence permit that expires in September.

The documents say that Mr. Black, who has sold all his property in the United States and Britain, has refused to provide a bank letter of credit to secure his income tax debt on the sale of his Toronto mansion at 26 Park Lane Circle.


“It is open to Black, and would be relatively easy to move his funds, including liquidated equity from Park Lane, offshore and relocate abroad at any time, thereby jeopardizing the collection of his tax,” the revenue agency said.

...The documents also show an unusual arrangement in the sale of Mr. Black’s mansion, which is now on hold. The undisclosed price was $14-million, which was $5-million less than an appraisal commissioned by Canada Revenue Agency.

Revenue investigator Jon-Paul Rebellato said in the court documents that the unnamed buyer agreed to lease the mansion back to Mr. Black at an annual rent of $155,000. The sale included a verbal agreement with the purchaser to give Mr. Black 50 per cent of the proceeds of any future sale of the property.

Something, as you might have guessed, is not right here. Connie's tapped? No money in the bank. A 14-million dollar property subject to a 13-million dollar mortgage? The guy owes 31-million in outstanding taxes. AND HE'S NOT BANKRUPT? His creditors, the Canadian and U.S. governments haven't petitioned Black into bankruptcy so they can go after his worldwide assets, find out where everything (if there is anything) is hidden?

Something is not adding up.
Posted by The Mound of Sound at 9:29 AM

It is time to stop treating this felon with kid gloves, Mound. I, and countless others, for example, have wondered about the length of his temporary residence permit. Is it renewed annually, and if so, on what basis?

No idea, Lorne. That he's been allowed to stay here this long puzzles me. He has this idea that we should restore his Canadian citizenship despite his U.S.felony record. Who can forget how he denigrated Canada when he renounced his citizenship in exchange for a minor peerage.

One would assume he'll be asked to discharge his debts to the tax collectors before filing for reinstatement to the Clan.

He's got less than the monthly mortgage payment in the bank, but doesn't seem to have defaulted. I wonder where the payments are coming from. Surely not from his and Bab's scribblings.