Chris Hedges figures we're fattened lambs being prepped for slaughter by the agents of corporatism, those we ourselves put in office.  He writes, of course, of America. Canadians, naturally, don't have a care in the world on this stuff. Don't we?

The aims of the corporate state are, given the looming collapse of the ecosystem, as deadly, maybe more so, as the acts of mass genocide carried out by the Nazis and Stalin’s Soviet Union.

The reach and effectiveness of corporate propaganda dwarfs even the huge effort undertaken by Adolf Hitler and Stalin. The layers of deception are sophisticated and effective. News is state propaganda. Elaborate spectacles and forms of entertainment, all of which ignore reality or pretend the fiction of liberty and progress is real, distract the masses.

Education is indoctrination. Ersatz intellectuals, along with technocrats and specialists, who are obedient to neoliberal and imperial state doctrine, use their academic credentials and erudition to deceive the public.

The promises made by the corporate state and its political leaders—we will restore your jobs, we will protect your privacy and civil liberties, we will rebuild the nation’s infrastructure, we will save the environment, we will prevent you from being exploited by banks and predatory corporations, we will make you safe, we will provide a future for your children—are the opposite of reality.

The loss of privacy, the constant monitoring of the citizenry, the use of militarized police to carry out indiscriminate acts of lethal violence—a daily reality in marginal communities—and the relentless drive to plunge as much as two-thirds of the country into poverty to enrich a tiny corporate elite, along with the psychosis of permanent war, presage a dystopia that will be as severe as the totalitarian systems that sent tens of millions to their deaths during the reigns of fascism and communism.

Thank Freya that's only America. But, wait, is it really? Sure our cousins to the south are going through a rough patch. Having to choose between Drumpf and Hillary isn't pleasant. Talk about an election where everybody is holding their noses to vote. Who will it be - Bad or Worse?

Besides, it's America. They're flamboyant, always doing everything to extremes. It's easier to see the rot that way. You've got to dig around a little more to see it in Canada. It's still there but it's understated, seemingly gentler, less offensive.

Some of the stuff he chronicles is found here. Manufactured news spun and flavoured and dished up by our corporate media cartel. We've sure got that. Monitoring of the citizenry - I haven't heard Justin say he's dismantling the pipeline secret police his predecessor set up. Have you? CSIS is still in the domestic surveillance business, right? If you haven't heard anything to the contrary, it is.

Inequality - of wealth, income and opportunity - that's still going on. That's a self-perpetuating problem if left unattended. Neoliberalism? Yes, it's alive and well in the True North.

Then there's the kicker, what Hedges calls "the looming collapse of the ecosystem." It's happening even if you didn't notice it on your commute to work this morning. This CO2 chart from NASA tells you everything you never wanted to know. Since 1950 we have been in a man-made environment unlike anything known for the last 400,000 years.  All my life and, I'll bet, all yours too has been in that unprecedented territory. 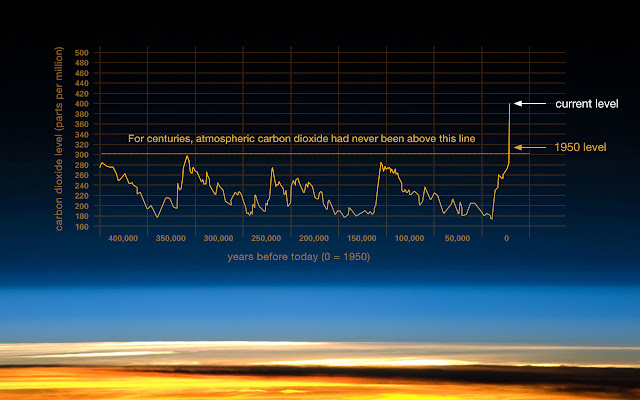 False hope and great illusion - is that all that's keeping us going? Is that what's propping up the state? Given the way our civilization is responding to this looming ecological collapse what else could there be? It's a house of cards.

Hedges argues that our only hope now is to take our fate into our own hands. New political movements, civil disobedience and more.

It is time to step outside of the establishment. This means organizing groups, including political parties, that are independent of the corporate political machines that control the Republicans and Democrats.

It means carrying out acts of sustained civil disobedience. It means disruption.

Many who work within ruling class structures understand the corruption and dishonesty of corporate power. We must appeal to their conscience. We must disseminate the truth.

We have little time left. Climate change, even if we halt all carbon emissions today, will still bring rising temperatures, havoc, instability and systems collapse to much of the planet.

Let us hope we never have to make the stark choice, as most of the [Warsaw] ghetto fighters did, about how we will die. If we fail to act, however, this choice will one day define our future, as it defined theirs.
Posted by The Mound of Sound at 8:58 AM