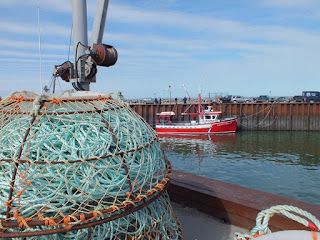 Two years ago there was some sort of contamination problem with Asian seafood.  I think it was something viral. In any case the seafood appetites of wealthy Asians were not being met.

It didn't take long for Asian buyers to reach the Pacific northwest and they came with money, lots of it. The upshot of it was that locals found themselves staring at ridiculous prices for seafood from their own waters.

It was great for the commercial fishing industry. They made out like bandits. It was bad for everyone else.

I was in my doctor's waiting room. An old fellow sat beside me. He was carrying a bag. The receptionist came over and he handed her the bag asking if she could put it in their refrigerator. He was a fisherman and the bag was full of freshly caught prawns, a gift for the doctor. At that point prawns were fetching prices upwards of $40 a pound.

This fellow and I got into a conversation. He told me how he and his sons were making a killing off the Asian markets. I eventually asked him just who those prawns belonged to, him or the province and people of British Columbia? Were we sharing in his windfall because we were certainly feeling the pain of it?

We're going to have to deal with this question. The world is running out of fish. The commercial fleets are "fishing down the food chain" collapsing one fishery after another.

The stuff they sell today is often mislabelled or not labelled at all. I was in the frozen food aisle of a local store yesterday and I stopped to look at the "Captain Highliner" stuff - fish sticks, fish cakes, that sort of thing. The boxes said only that it was wild fish from the north Pacific.

A couple of months back I was over at the fishing port just down the road from my place. The boats were lined up, waiting to unload their obviously hefty catch.
I had to look. It wasn't cod or herring or anything like that. I asked the fellow on the dock, "is that hake?" and he nodded yeah. I asked since when did anyone bother catching hake, long considered a garbage fish. He said the fish processors take it, do something with it, add spices and flavourings, and then flog it as - you guessed it, "wild fish from the north Pacific."

If our kids are eating that stuff it means our good fish are going somewhere else, chasing the highest price. But that fish that is being sold to foreign buyers, that's our fish. Shouldn't British Columbians and other Canadians have first go at it at a moderate price. It belongs to the fisherman when he hauls it into his hold but before then it belongs to me.

Food security is a problem that's just beginning to gain traction. Over the next 20-years it's going to be a huge issue. This is a good time to ensure that our natural abundance is securely ours. That doesn't mean stopping exports. It means staking a claim and putting everyone on notice.

This business came to mind as I was reading a Globe story about the use of high tech modeling in the Atlantic fishery. The challenge, according to the report, was to "keep up with worldwide demand for seafood." There was no mention of the challenge of securing local access to an essential resource. That, in my view, should be the priority.
Posted by The Mound of Sound at 12:22 PM

Along with the NEP we need a FEP. Food Eating Plan. We send our best food to China, and they sell us veggies fertilized with human waste and heavy metal.

Just like that sea of plastic swirling around in the Pacific - out of sight, out of mind - the fish and other aquatic life, hidden from us by those oceans of blue - are also out of mind. Out of mind, that is, until it ain't available anymore. Kind of like Atlantic cod, the remains of which are now infected with seal worms.


We get worms in a fraction of our salmon. The description I read indicated that the worms can only reproduce in seals and sea lions. They merely incubate in the fish. Then, when the seals/sea lions eat the fish the worms take up residence in the seals where they reproduce and are expelled to be eaten by migratory fish that pass inshore. And that's why people get sick when they use raw salmon for sashimi. Deep water fish, such as the big tuna, are generally parasite free.

Hi, just passing by to see something very interesting and gladly I've found it here. Thank you for your wonderful article it really helped me a lot. You can also visit my site if you have time.