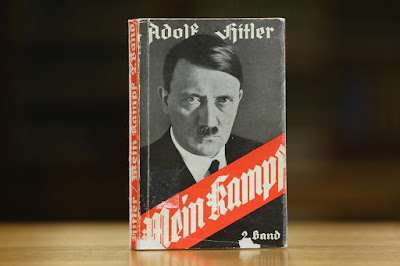 In today's troubled Europe where some nations are proudly proclaiming the triumph of illiberal democracy denounced by others as fascism, the renewed public appetite for Hitler's Mein Kampf has many worried.

On Saturday, "Mein Kampf" could become even more widely accessible in Europe. The right-wing Italian newspaper Il Giornale has announced that it will distribute the book freely to readers of its Saturday edition — an announcement that drew heavy criticism from Jewish groups in the country.

Similar plans of a right-wing publishing company in Germany had already caused outrage earlier this week. "Mein Kampf" has been available in German bookstores since January — but only in an annotated version that is supposed to point out inconsistencies and lies in Hitler's arguments. There are more than 3,000 additionalcomments in that version.

According to German law, publishing the book without annotations would be considered seditious. But that is what right-wing publishing company Schelm is now planning to do. Prosecutors are investigating the plans and could file charges even before the book gets published.

"This book is too dangerous for the general public," library historian Florian Sepp told The Washington Post last year, reflecting a sentiment among several German experts on that research field.
Posted by The Mound of Sound at 12:16 PM

Hitler's boneheaded book is not the problem.

The real problem is that old-money European aristocrats used the euro-zone as a currency market manipulation scheme to extract vast sums of money from fringe countries in the form of government debt. This has destroyed the European economy and driven many to reject capitalism and democracy for fascism.

These corrupt POS said they were creating the euro-zone to prevent another Hitler or Napoleon from rising up. But what they've actually done is create the conditions where another megalomaniac fanatic will attempt to revive the Roman Empire from the dustbin of history causing another world war.

The fact is if people around the world confiscated the wealth of every person with over $100-million and invested that money back into society, we would have an economic boom unprecedented in history. The problem is corruption, botched distribution of incomes and wealth and a serious lack of sensible democratic regulations.

I read Mein Kampf and Mao's Little Red Book forty plus years ago. I wasn't terribly impressed with either. The success of dogma requires eyes and ears that believe it. I am not so concerned that someone is selling Mein Kampf as that there is an appetite for belligerence in today's world.

Anyong said....it seems some people would like to see another war using the poor to maintain it.

Those who govern also profess: "The truth is too dangerous for the general public"
A..non