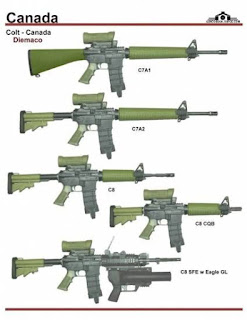 Canada has moved up. We are now the second biggest supplier of arms to the Middle East.

Just a question. If we're doing such a landslide business selling armaments to foreigners, why is our military in such bad shape?

Canada has also vaulted to sixth overall among all arms-exporting countries, based on rankings released by Jane’s this week. This means only five countries are currently selling more weapons and military equipment.

IHS Jane’s analyst Ben Moores said he suspects Canada has never ranked so highly among all arms-exporting countries and that it certainly hasn’t held that position in the past 15 years.

The Trudeau government, asked whether it took pride in Canada’s expanded role as a weapons seller and would feature this achievement in trade promotion materials, referred the questions to a department of Global Affairs bureaucrat. The civil servant instead said Ottawa hopes to toughen screening of weapons sold to foreigners.

Cesar Jaramillo, executive director of Project Ploughshares, a disarmament group in Waterloo, Ont., that is an agency of the Canadian Council of Churches and tracks arms shipments, said Canadians should be worried that their country is now the second-largest arms exporter to “the most volatile region in the world” today.

“This ranking comes days after Canada addressed the UN Security Council and highlighted the importance of protecting civilians in conflict zones … it is civilians who are often most at risk as a result of arms dealings, in particular to regions engulfed in conflict and notorious for their poor human rights records,” Mr. Jaramillo said.

Wait a minute, did I just hear that right? Canada put in an appearance at the UN Security Council to deliver a lecture on the "importance of protecting civilians in conflict zones?" Yet we'll sell Death Wagons to the Saudis who are relentlessly slaughtering Houthi civilians in Yemen. Yeah, this "we'll do better next time, promise" stuff is bullshit.
Posted by The Mound of Sound at 9:17 AM

This government will do militarily and Neoliberally whatever the US and NATO wants it to do. They have shown no interest whatsoever in what Canadians want them to do.

Pamela, it takes a certain type of leader to carve out a uniquely Canadian path on anything. We've been a uniformly co-operative/collaborative firm for the past two decades. We throw in with coalitions where either a dominant partner or a collective calls the shots. It's a fine posture for getting into Perma-War.