Oh, I Don't Know, I Suppose They Think Slavery Isn't Good Enough for Them. 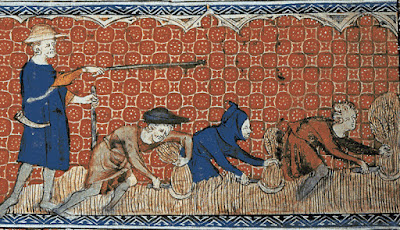 Young Americans are giving up on capitalism. That's the angle of an article from Foreign Policy. The report paints a grim but familiar scenario.


Imagine that you’re twenty years old. You were born in 1996. You were five years old on 9/11. For as long as you can remember, the United States has been at war.

When you are twelve, in 2008, the global economy collapses. After years of bluster and bravado from President George W. Bush — who encouraged consumerism as a response to terror — it seems your country was weaker than you thought.

In America, the bottom falls out fast.

In 2009, politicians claim the recession is over, but your hardship is not. Wages are stagnant or falling. The costs of health care, child care, and tuition continue to rise exponentially. Full-time jobs turn into contract positions while benefits are slashed. Middle-class jobs are replaced with low-paying service work. The expectations of American life your parents had when you were born — that a “long boom” will bring about unparalleled prosperity — crumble away.

Baby boomers tell you there is a way out: a college education has always been the key to a good job. But that doesn’t seem to happen anymore. The college graduates you know are drowning in student debt, working for minimum wage, or toiling in unpaid internships. Prestigious jobs are increasingly clustered in cities where rent has tripled or quadrupled in a decade’s time. You cannot afford to move, and you cannot afford to stay. Outside these cities, newly abandoned malls join long abandoned factories. You inhabit a landscape of ruin. There is nothing left for you.

Every now and then, people revolt. When you are fifteen, Occupy Wall Street captivates the nation’s attention, drawing attention to corporate greed and lost opportunity. Within a year, the movement fades, and its members do things like set up “boutique activist consultancies.” When you are seventeen, the Fight for 15 workers movement manages to make higher minimum wage a mainstream proposition, but the solutions politicians pose are incremental. No one seems to grasp the urgency of the crisis. Even President Barack Obama, a liberal Democrat — the type of politician who’s supposed to understand poverty — declares that the economy has recovered.

America's young, the 18-29 year olds are turning against capitalism, at least the predatory capitalism that is the hallmark of neoliberalism.

According to an April 2016 Harvard University poll, support for capitalism is at a historic low. 51 percent of Americans in this age cohort [18-29] reject it, while 42 percent support it. 33 percent say they support socialism. The Harvard poll echoes a 2012 Pew survey, in which 46 percent of 18- to 29-year-olds had a positive view of capitalism, and 47 percent a negative one. While older generations had a slightly more positive take on capitalism — topping out at 52 percent for the oldest cohort, citizens over 65 — youth had a markedly different take on socialism. 49 percent viewed it positively, compared to just 13 percent of those 65 or older.

Does this mean that the youth of America are getting ready to hand over private property to the state and round up the kulaks? No. As many of those who reported on the Harvard survey noted, the terms “socialism” and “capitalism” were never defined. After meeting with survey takers, John Della Volpe, the director of the Harvard poll,told the Washington Post that respondents did not reject capitalism inherently as a concept. “The way in which capitalism is practiced today, in the minds of young people — that’s what they’re rejecting,” he said.

American youth seem to be rejecting modern predatory capitalism that preys on their generation. What they seek is some restoration of New Deal democracy, what I like to call progressive democracy.

As a consequence, these basic tenets of American work life, won by labor movements in the early half of the twentieth century, are now deemed “radical.” In this context, Bernie Sanders, whose policies echo those of New Deal Democrats, can be deemed a “socialist” leading a “revolution”. His platform seems revolutionary only because American work life has become so corrupt, and the pursuit of basic stability so insurmountable, that modest ambitions — a salary that covers your bills, the ability to own a home or go to college without enormous debt — are now fantasies or luxuries.You do not need a survey to ascertain the plight of American youth. You can look at their bank accounts, at the jobs they have, at the jobs their parents have lost, at the debt they hold, at the opportunities they covet but are denied. You do not need jargon or ideology to form a case against the status quo. The clearest indictment of the status quo is the status quo itself.

The crushing reality depicted in this article breathes life into Chris Hedges' contention that America is in a simmering, pre-revolutionary state. He argues that it's not a matter of if but when and then how bad will it be. Remember the Arab Spring uprisings were a result of several forces but youth disaffection was one of the most powerful. Sanders and Trump have shown that their country has a broad-based discontent that, when properly led, could be the kernel of open unrest that takes hold and spreads.

Neoliberal capitalism with its hellspawn of globalism, inequality and oppression never was the "trickle down" cornucopia of prosperity and ease. It was, instead, a "trickle up" phenomenon where wealth was gradually sapped from the working classes, winding up in the laps of the 1%. It only took just 30 years for America to reach the point of economic feudalism.


Update: It's not just Americans who are being battered by today's predatory capitalism. Read this article, "I Go to Bed in Tears," from The Tyee.
Posted by The Mound of Sound at 7:00 AM

Your closing comments brought these Greg Brown lyrics to mind:

"I watched my country turn into
a coast-to-coast strip mall
and I cried out in a song:
if we could do all that in thirty years,
then please tell me you all -
why does good change take so long?"

it is encouraging that the young are now realizing what many of us have known for a long time, Mound, that the apparatus of both government and business do not exist for them. If this understanding leads them to pose a threat to the merciless, unfettered perversion of capitalism now extant, say, in the same way that the old competing system of communism formerly did, perhaps some remediation will ensue.

I really don't think that it is entirely different for this generation as it was for us in terms of rejection of capitalism. Sure, we could choose from many more job possibilities but they weren't always "career' jobs. Some of us had student debt, maybe not as high as those students to-day. I think what I am trying to say is that our " Hippie" era revolt against the establishment (capitalism) only left us further behind when the Hippies donned suits and got rich while the rest of us were in a dream like haze. I'm not saying that this generation's isn't a justified trend but they better be careful when the slimeballs use their apathy to get a bigger piece of what they reject.

These are the very people who believe in, and support Bernie Sanders and the political revolution he calls for.

Seems dumb to poll for "support of capitalism." I know more than the average person about political science, yet I would not know how to answer this poll.

For instance, what is the alternative to "capitalism"? Communism? If the poll is based on this false dichotomy, I imagine I would "support capitalism."

Fact is every false dichotomy reveals a spectrum where the options are actually poles. In the case of economics, the spectrum is left/right. 100% left is full government control over the economy (communism.) 100% right is no government involvement in the economy (free-market capitalism.) In the center is the Keynesian mixed-market system (a combination of both.) Left-leaning centrist is democratic socialism (like Scandinavia.)

In the post-war era (1945-1980,) North America was Keynesian. But beginning with Reagan and Mulroney, we ditched Keynes for Friedman and right-wing neoliberal (neoclassical) economic ideology. Worked wonders. Culminated in economic collapse like the original 19th-century "classical" economic system in the 1930s.

Only fools, reactionaries and headless chickens run into one wall than turn around and run into the other wall (rinse, lather, repeat.) People who have brains will see that the solution is going to be somewhere in the center. (Why have a communist revolution when you can adopt all the aspects of communism you like, while keeping a free society and decentralized but regulated market economy?)

@anan
A false perspective too. Manichean black and white thinking is as flat as the paper such concepts are written on. We live on a spinning three dimensional sphere and as such the Earth's center is a point found along the shortest distance between its north and south poles; then there is everything else above, up to the edge of creation.

We Must Harness Capitalism To Our Ends, And Not Let Capitalism Harness Us To Its Ends.

•We must regulate industry to make sure it isn't depleting resources, and creating pollution.
•We must work hard to ensure a competitive marketplace, so no company gets monopoly power that allows it to screw consumers.
•We must find ways to get workers more leverage, so they can make truly free choices to work for a company or not.
•We should limit the size and power of corporations so they cannot do global scale harm.
•And we should make sure that investors are not the only ones sharing in the increasing prosperity brought about through innovation and free trade.

But the first order of business, if we want Democracy to remain in charge of Capitalism and not the other way around, is this:

•We must get money out of politics
And no one but no one should have more than 50,000 million dollars at their disposal.
Most of all, we cannot keep producing people in order to get our way over religion.

Anyong said....And if 315,000 million dollars of donations from across Canada can be sent to Fort McMurray then we can begin to do the same for affordable housing. If there is that amount of loose money can be found for those people, think what we can do by organizing without any political people involved what so ever. Add to the above 1:41 written by Anyong, all Landlords must be regulated. I wonder where I would be if my parents had to pay out the sort of rent people are required to do today. We certainly would not have had a beautiful home built by my father and his brothers 6 years after WWII mortgage free by the way.
Question...what the hell is happening with all that 649 and Lotto Max money? Where is that going? 60 Million before someone wins. Imagine how much is being taken in. That could help Canadians out of their misery by providing a $500,000 win for many people.

Housing is very expensive for young people, especially in certain areas. Why?

The interest rate is kept low because the economy "needs" to grow, every year.

The GDP "needs" to grow every year, because that is how the govt/central bank deals with the massive, growing debt level.

Add to that all the foreign RE speculation and money-laundering, which adds to the bubble.

It's basically a giant Ponzi scheme, which always burst. When RE prices inevitably come down there will be losses, which will reverberate throughout the economy as a whole.

The US Federal Funds rate will stay at rock bottom for the foreseeable future:

A RE correction would cost banks $billions, but it's ok because mortgages are insured by CMHC, ie Canadian taxpayer: