What the Fort Mac Fire Tells Canadians About Ourselves 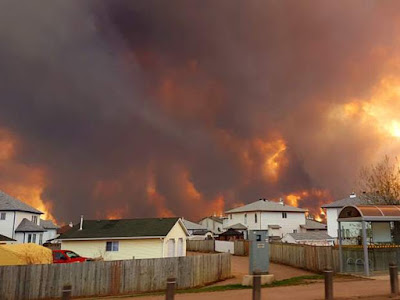 A poli-sci prof from Brock University, Blayne Haggert, has an interesting look at how Canadians responded to the Fort Mac wildfires and the climate change issue and reads in it what might lie ahead. It ain't good.

..let’s discuss what the sincerely expressed desire not to link Fort McMurray and climate change says about Canada’s ability to respond to challenges posed by climate change. To do that, we have to think about why governments decide to act in certain situations but not in others.

According to John Kingdon, who wrote the book on government decision-making, governments do not act just because something bad happens (say, the slow cooking of the world). Rather, something has to be perceived as being a problem. Mr. Kingdon notes that “focusing events” create “policy windows” in which perceived problems (say, climate change) are linked to proposed solutions (say, deal with climate change via a carbon tax, or greater support for sustainable energy) and to the political will to do something.

...The Fort McMurray fire was a potential focusing event. Climate scientists and government experts agree that such extreme weather events are made more likely by climate change. Sure, you cannot link one event to climate change, but this is exactly what we expected to see more of based on what we know about climate change. Claiming that the Fort McMurray fire should be a political wake-up call was not an insane argument, especially because making it does not affect the immediate emergency response at all.

But most Canadians, many of whom are not climate-change deniers, have vehemently resisted making this link, and so that policy window – and with it, an opportunity for a serious discussion of how Canada should respond to climate change – has closed.
...Why Canadians have rejected this linkage is open to debate. Regardless, this rejection strongly suggests we as a society effectively are choosing the climate-change path of least resistance and maximum damage. We are choosing to deal with the increasing number of extreme weather events as they happen, and choosing to avoid even thinking about concerted, costly efforts to halt climate change.

Haggert isn't alone. He's not the first to notice that our society is showing little interest in acting effectively today to forestall catastrophe in a decade or two down the road. We have indeed chosen, "the climate change path of least resistance and maximum damage." Good luck with that. Let'er rip.
Posted by The Mound of Sound at 12:17 PM

Human nature is funny. We elect leaders to "make the hard choices", but once elected, our leaders more often then not defer making the hard choices, because "we, the electorate, aren't ready".
What's even more funny, in this case, the hard choice is actually relatively easy to make. Or it should be easy, at least. There's nothing standing in the Liberal government's way of working toward change within Canada. They have a majority, after all. It's the reason they were elected to lead the government, to change Canada.
There's a great deal of potential in a greener future. More so then in our current carbon-dependent future. In fact, there's not much of a future for us on our current path. We have no chance, whatsoever, really.
And yet the Liberals would have continue onward as though there's nary a worry.

The sense I have of it, Troy, is that they operate with blinders that obscure their focus beyond the next election. This compounds our natural reticence to sacrifice anything for the future, especially for two or three generations to come. Yet the nature and magnitude of the plainly existential challenges that confront us demand sacrifice both long-term and immediate, initially without any reciprocal reward. Ultimately it may be our incapacity for selflessness that defeats us.