I'm posting this because it illustrates the predicament we've got ourselves in and what might be entailed to get ourselves out of it. I know you don't want to read this but it's important, vitally important and so I feel obliged to post it anyway. I almost feel like I should be apologizing for this.

The planet is reeling from loss of biodiversity. This is a problem that reaches from lowly microbes to the largest lifeforms on Earth. Species are falling extinct at rates wildly above normal and far beyond sustainable. Surveys of non-human life of all sorts, marine and terrestrial, have found that life on Earth has declined by half since the 1970s. Our stocks of terrestrial life and down by half. Our stocks of marine life are down by half. In case you're wondering, they're still in decline also.

Along comes E.O. Wilson, a world class biologist, who has a way to fix all this. He wants us to set half the world aside for all other forms of life. Humans get half. Nature gets half. That goes for our oceans too.


The reason why half is the answer, according to Wilson, is located deep in the science of ecology.

“The principal cause of extinction is habitat loss. With a decrease of habitat, the sustainable number of species in it drops by (roughly) the fourth root of the habitable area,” Wilson wrote via email, referencing the species-area curve equation that describes how many species are capable of surviving long-term in a particular area.

By preserving half of the planet, we would theoretically protect 80% of the world’s species from extinction, according to the species-area curve. If protection efforts, however, focus on the most biodiverse areas (think tropical forests and coral reefs), we could potentially protect more than 80% of species without going beyond the half-Earth goal. In contrast, if we only protect 10% of the Earth, we are set to lose around half of the planet’s species over time. This is the track we are currently on.

Nice idea but there are snags. The biggest snag is that humanity, as we're constituted today, can't live with just half of Earth. The reason that our stocks of marine and terrestrial life have plummeted by half over the past four decades is because of us. We're taking so much of everything that there's not enough for everything else and so their numbers have to plummet.

In an essay for Aeon, Robert Fletcher and Bram Büscher, both social scientists with Wageningen University in the Netherlands, dub Wilson’s idea “truly bizarre.”

“For all his zeal, (misplaced) righteousness and passion, his vision is disturbing and dangerous,” they write. “It would entail forcibly herding a drastically reduced human population into increasingly crowded urban areas to be managed in oppressively technocratic ways. How such a global programme of conservation Lebensraum would be accomplished is left to the reader’s imagination.”

Did you get that? Wilson's solution would be truly dystopian beginning with a massive cull of humanity. Some calculations have concluded that Earth's human carrying capacity is just under 3 billion. Half an Earth then might need us to get down to 1.5 billion. We're nearing 7.5 billion now so that would be a cull of most of humanity and as much as 80%. Or we could go full-bore Blade Runner and cram billions more into chronic urban density.

The point, however, is that the way we're living now will not continue. This graphic from 2014 produced by the Global Footprint Network illustrates our ecological dilemma. 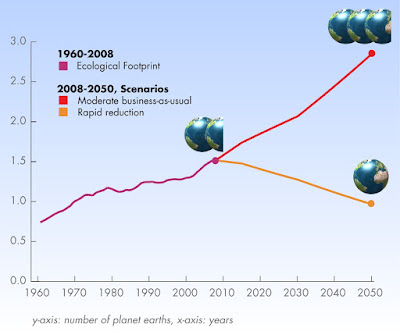 In 2014 we had reached the point where we, mankind, were consuming the equivalent of 1.5 times our planet's capacity for renewable resource replenishment. We needed one and a half planet Earths to support our consumption. Today that has reached the 1.7 point. By 2050 we'll hit 3.0 - except we won't.

In the course of hunting down that graphic I came across this post from October, 2014 about a gathering of Nobel laureates who met annually to evaluate the state of our planet. They called for "revolutionary change" saying there was no other path.

The state of affairs is “catastrophic”, Peter Doherty, 1996 co-winner of the Nobel prize for medicine, said in a blunt appraisal.

From global warming, deforestation and soil and water degradation to ocean acidification, chemical pollution and environmentally-triggered diseases, the list of planetary ailments is long and growing, Doherty said.

...The worsening crisis means consumers, businesses and policymakers must consider the impact on the planet of every decision they make, he said.

Underpinning their concern are new figures highlighting that humanity is living absurdly beyond its means.

...“The peril seems imminent,” said US-Australian astrophysicist Brian Schmidt, co-holder of the 2011 Nobel physics prize for demonstrating an acceleration in the expansion of the universe.

It's well known that people, even progressives, tune out to reports dealing with the environment or climate change. The "head in the sand" approach guarantees one result and only one.

Progressives in Canada. My social media has two groups: Well-meaning people (1) posting emotionally heavy (or angry vitriol) essays about how oppressed they are or about how guilty they feel about being part of some historical ethnic group that did the oppressing; (2) people talking about climate change. There's not a lot of cross-over. LEAP at least seemed to be an attempt to get everyone under the same roof, but it has its own issues with logic and consistency.

So where do you see us going, Boris?

Hey E.O. Wilson,
king of genetics for like forever...
and author of
"The Social Conquest of the Earth".
which challenges the genetic CW he himself developed!!
Should be required reading for all politicians. It might just provide a social framework to solve the rest of our problems

sorry mound
I haven't seen any proposed solution
that doesn't included at least two or three conditions
that are outside the range of human natural reactions and intelligence
we are just not equipt
our minds are too small,
our vision barely beyond dinner
our short term rule of the earth is like a cosmic comedy of errors
short of some intervention
which gets you into the second coming or aliens
we will just sit around in awe at the burning of the earth
saw a t-shirt once
"power is an exercise in integrity"
we gained power but never had the aspect of being able to integrate it into our actions or the paradigm of earth
and as we spin faster and faster
we will disintegrate

Based on your previous post about imminent war, it seems the problem is about to be resolved. Humanity gone, problem solved.

AniO, I hope that they're going Nixon on Putin. During the peace negotiations with the North Vietnamese, Nixon thought he should give the impression that he was unbalanced enough that he might nuke Hanoi, just to get them to bargain.

I would like to think Putin is stable enough to realize a major military engagement by two nuclear powers can easily get out of control. Then again I'd like to think our side is that stable also.

There's been this scenario floating around for the last few years of the major powers stumbling into a war no one wants along the lines of the outbreak of WWI. Wouldn't that be a mess, eh? A major world war over Latvia.

Add to that a report out of the BBC..... more and more light at night is not good for our healing ability. Electricity companies made 60 billion dollars world wide last year. As soon as I put black curtains up, I am sleeping through the night. Yet another environmental problem due to our greed. Referring to your blog, who do you think would be culled by the powers that be?

That light thing is absolutely true. My cable provider installed new hardware in my home a few years ago. The cable boxes in the LR and BR had a blue light arrangement. Blue light is incredibly disruptive at night. I finally had to drape a dark cloth over it and I slept just fine again.

As for the culling if it happens I expect it won't be planned. Disease, perhaps, war possibly. I can't imagine we would be very good about it in any case.

The Canadian left? It needs to get it's collective head out of its arse. Climate change is the overarching crisis and it does change everything. In Canada much of the left's positions involve carving out discursive or material space for an increasing variation of rigid identities and flippant concepts (like mansplain) that translate into an incoherent cluster of self-interested factions who are superquick to find offence and then also resist constructive debate because talking about something is "triggering". I hear this from 20 year old activists undergrads and adult academics. When the left was mostly socialist or earlier liberal, it had a clear theory of society and economics to work with, a rich and rigorous intellectual platform to build on. Now, instead of socialism or a welfare-state liberalism, we have "anti-capitalist" which is literally onlythe criticism of the status quo and offers nothing like an alternative platform. Meanwhile, we're in a climate emergency and a xenophobic right-wing ascends.