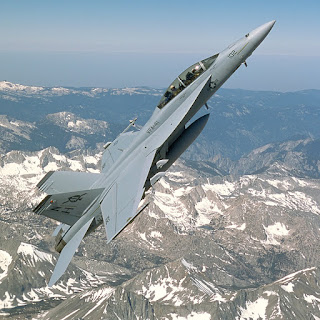 There are plenty of options this time around - the F-18E Super Hornet, an updated F-15 Eagle, the Eurofighter Typhoon, the SAAB Gripen and the Dassault Rafale. Oh yeah, and the F-35 light attack bomber.

For some reason there'll be no true fighter competition this time, no fly off. It's not clear why. I imagine it's a political decision. It's bad enough we spurn Lockheed's uber costly, underperforming F-35. It would be a major snub to our next door neighbour if we didn't buy something else off their showroom floor. Besides we've had a great experience operating the original Hornet. While the Super Hornet differs in several respects, it's still familiar.

The decision might mean that Canada wouldn't be invited to participate in the opening day of an air war over China but I expect we'll be able to manage somehow.
Posted by The Mound of Sound at 9:23 AM

More and more Canada's government behaves like a 51st State.
Trudeau the Elder knew where to draw the line; Trudeau the Younger doesn't.

Well, we Canadians are glued to American television and like everything American...what else would you like to ask. Thank goodness, we still have a bit of Monarchy left in this country...we could not have a Trump here now could we?

.. twin engine.. approx half the cost .. actually deliverable .. hmm - BUT .. aside from our alliances or 'obligation's' re Defense Treaties I question the entire priority of trying to keep up with the rat race economics of war - as Canada continues to be unable to afford up to date domestic coastal patrol, search & rescue etc etc. Yes Yes, we have 4 submarines, none of which are on patrol or ever will be again. We have outmoded frigates, destroyers, no marine fueling last I looked. We are Switzerland or Swaziland spread large (I must compare populations)

We are now unmuzzling scientists & biologist & may actually refund the Small Lakes Experimental project - thus redressing the creep Harper's brilliant echononsense.. have been shipping our forest resources off with the bark on & let our sawmills & secondary industry whither and die. It appears our forests, freshwaters were an impediment to feeding China's economy, so good riddance. And we have Norwegian farmed salmon to replace our wild salmon, so we can jettison Orca. eagles, sea otter, coastal wolves, bear.. along with the keychain herring.. after all LNG will let every person in BC own a shiny pony and a unicorn

I do not believe we belong on any international stage Mound.. we are still trying to get out of the closet Stevie/Ray & the evangel reformatrons led us into. We can't even solve a massive Election Fraud or pass coherent legislation.. or replace the legislation that used to protect environment, species & habitat.. We still await the 'fulsomeness of time' to reveal how heavy the cement overshoes are that foreign trade deals are.. or the f'n details.

We do good gazebo and G20 mass arrest. Still punish minor pot perps & I no longer know where all the foreign run uber prisons are or will be.. We gave away the Wheat Board assets just in time that a bumper crop of western grain had zero supply chain connection via rail. Screw the farmers seemed the motto of the the blotto westerner PM.. It was a personal itch he wanted to scratch.. and did. Damn but he had a lot of itches.. and almost 1/6th of my life was spent under his dubious secretive incompetent thumb. There's a 10 year dead zone - kind of a radioactive winter that's transpired & now some of us look around and wonder where to start - which fire to put out, if we can find the tools.. or water ..

Well....Newfoundland was sold down the drain for the 50's sale of wheat to the Russians. Newfoundland with all its wealth illegally became a part of Canada as payment for the money Canada paid out to Britain after WWII. Ottawa has a habit of thinking certain parts of the country are dumb and Ottawa can pull the wool over their eyes. Don't you know, it is Ottawa that thinks its the smartest place in Canada.

My first response to these comments is that Canada, like every other nation, is embarking on a difficult and largely uncharted journey. Enormous upheaval lies ahead and even nations that escape it directly will be rocked by its indirect impact.

We will need a truly defensive military force to defeat and repel threats to our sovereignty. With such a vast territory to defend, such a small population and such a minuscule budget for our military, we must choose very wisely.

The same reality applies to other aspects of this nation - political, economic and social.

Solid, proven, flying machine, easiest to transition to from the existing fleet, and does everything the RCAF needs it to. RCAF is quite similar to the RAAF in size and fleet anyway.

I would like to see a fly-off against a range of competitors i a fair competition but I expect decisions have been made...

The military threat I expect first would be a renegade militia forming up among climate refugees in the US. Because of their stupid gun laws, the militant idiots will be well armed. I seriously doubt that Canada' military could cope.

There is also now an Advanced Super Hornet option Australia and the USN are looking at, as wells the EA-18 version. This also means the Lockmart has a serious price problem with its wee toy when a major buyer like Canada shelves it's interest.

Boris, if you follow the link in this post it will take you to Boeing's F-18 web page. There you'll find a page dealing with the "Advanced" options. These comprise conformal, over the wing, fuel tanks; an advanced avionics suite and a low-signature "stealthy" weapons pod to house missiles, etc. Apparently they can all be retrofitted.

One thing I haven't seen is any modern electro/optical targeting ball. Lockheed even retrofitted a retractable system on the F-35. It appears, from Boeing's web site that they have an advanced IRST ready to go. It also has a pretty effective AESA radar package.

Overall it doesn't sound too bad - until you run into a Su-30.

I still want Dash 8 drones instead.

Let's put all those homeless people to work as well in the military, building, planing, plotting and at the ready. Aww yes, I forgot, this country is a democracy.

the sal said.....
"We are now unmuzzling scientists & biologist & may actually refund the Small Lakes Experimental project - thus redressing the creep Harper's brilliant echononsense.. have been shipping our forest resources off with the bark on & let our sawmills & secondary industry whither and die. It appears our forests, freshwaters were an impediment to feeding China's economy, so good riddance. And we have Norwegian farmed salmon to replace our wild salmon, so we can jettison Orca. eagles, sea otter, coastal wolves, bear.. along with the keychain herring.. after all LNG will let every person in BC own a shiny pony and a unicorn"

This so makes a laughing stock of Canada so what do we do about it?

I don't know how a modern Western fighter would fare against the best the Russian's or Chinese can field but I imagine that sort of contest could be decided by factors other than individual aircraft capabilities, as the fighters themselves (well, their radar and missiles) are integrated into larger AWACS, EW, sort of air picture, mostly geared to knock out enemy planes with missile shots from stand-off distances.