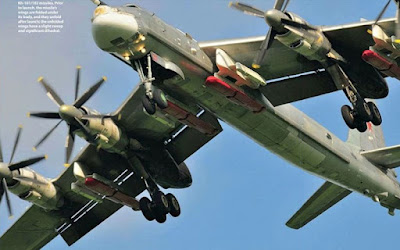 For me, the miner's canary was a PostMedia Matthew Fisher column claiming that opting for the Boeing Super Hornet instead of Lockheed's F-35 would leave the Canadian north defenceless. I let it slide. It was Matthew Fisher after all and I had him pegged years ago. Then I began hearing the same story from a friend who said he'd read it in the Washington Post.

The story goes like this. Within a few years the Russians will be deploying their new stealth fighter, the T-50, and of course there will be swarms of them and Putin will station them on Russia's Arctic frontier.

The second part of the scenario involves Russia launching a stealth sneak attack (along the lines of the American's "Operation Chimichanga" strategy) using these T-50 jets to launch a cruise missile attack against Canada and the U.S.

The third part argues that the best defence against a Russian stealth warplane is a Canadian stealth warplane. Ergo we're screwed if we're stuck with Boeing's Super Hornet. Our only hope of salvation rests on being able to deploy Lockheed's F-35s.

To begin with, this is multi-level bullshit. About a week ago I did a bit of research into Russian progress with development of its long-range cruise missile technology. The consensus seems to hold that Russia's latest air launched cruise missiles can achieve 30-foot accuracy over a range of up to 6,300 miles.

Now here's the thing. Russia's long-range cruise missiles, the type they would need to reach the really important targets in Canada and the northern U.S. are those red things shown underneath the wings of a Russian bear bomber in the picture above. They're essentially small airplanes with wings and engines and fins.

No one is going to be slinging those things under the wings of any T-50 stealth fighter. First of all they're too big to fit inside. They're probably too big to mount under the wings either.  And then there's the problem that, if you did find a way to put a couple under the T-50 wings there goes your supposed stealth advantage.

That's not to say the Super Hornet could defend against a determined, Operation Chimichanga scale cruise missile attack either. We'll never have enough fighters to maintain an ironclad defence across our vast Arctic. The Russians could pick their spots, launch their cruise missiles and turn away, probably just as we would be launching our interceptors.

Is Lockheed that desperate to keep Canada in line on the F-35? Do they fear we'll lead a stampede of other international customers? Hard to know what's going on but it is getting bizarre.
Posted by The Mound of Sound at 11:53 AM

I heard an interesting comment about the cancellation of the Arrow (long ago, I know, but there is an effort under way to advance a "Super Arrow") The commentator said that a) the cancellation was one of the greatest mistakes a Canadian government has ever made and b) that Dief was sold a bill of goods because the Arrow was better than anything the US had and was using technology they didn't have (titanium skin, etc.) but c) more than this the US wanted Canada to buy planes from that thereby reducing the cost per plane for them.

Seems like they were continuing their sharp techniques with the F35.

In Islands in the Stream Hemingway wrote of an aqueduct being built to bring water to Havana. A corrupt politician told him that the aqueduct would never be finished. Why kill the goose that lays the golden eggs? The government can always use the aqueduct as an excuse to raise taxes, an excuse that ceases when the job is finished. The F35 program appears to be more about corporate profits at the tax payer trough than anything useful in a military sense.

James, the Arrow has been the subject of endless conspiracy theories, none of them ever proven. A lot of this can be blamed on Diefenbaker who ordered every plan and drawing destroyed and who sent workers with cutting torches to dismember every airframe and component, all without any rational explanation at the time or for years afterward.

A senior air force general told me that Dief didn't get them all, that one survived and claimed to know where it was. He said it was literally under the nose of the boys on Parliament Hill.

Years later I was talking to a young airline pilot who had been in the air force who told me of getting stranded on Christmas eve at RCAF Rockliffe, just a few miles away from Parliament Hill.The station was pretty much deserted with everyone away on Christmas leave. This fellow and two other officers were all that was left that night in the officers' mess. They proceeded to get a bit tight. Eventually the base commander took this then junior officer out to one of the hangars. He had him pace out the length of one, first from the outside, and then inside. The pilot told me he figured there was a 15 to 20-foot discrepancy. The senior officer told him that it was a false wall and behind it was concealed... you guessed it. Of course he never saw what was behind the wall but he did come away with a great story.

There's no realistic prospect of building a new Arrow. It was a design for the bleeding edge technology and engineering of its day. It would have the radar cross section of a hockey arena. Could Canada get back into that sort of manufacturing. Sure we could. It would involve getting into a partnership with another company such as SAAB and working from their advanced technology and knowledge. There doesn't seem to be any political will or industrial interest.

The F35 is a hoax.
Even the Pentagon have misgivings.
I posted a similar article/link on the \National Post; it was there for a while then dissapeared ( stealth or what)

The aviation industry is chasing moonbeams trying to make stealth work in a day of bomb filled vests and car bombs.
An initial strike is fine but then what comes next ;another Iraq?


Toby, the fellow who became the Pentagon's acquisitions czar after the F-35 programme was underway called it an example of "acquisition malpractice." The whole "buy before you fly" approach was counter-intuitive and counter productive. It almost guaranteed an aircraft that was ridiculously over cost, over due and underperforming. I have a certain sympathy for Lockheed on this one. They were the winning competitor but this buy first, build second, develop as you go concept was a political decision by a government that decided incremental change was no longer adequate. They wanted a complete, generational leap which raised any number of insoluble problems.

Here's an example. When you build such a plane what adversaries do you foresee it having to best? If you build a plane of the future but design it to counter known threats, Mig 27s and Mig 29s, you may find that it doesn't fare all that well against the technology your adversary develops in the interim. America's stealth warplanes are designed to defeat non-stealthy adversaries. When the other guy deploys stealth fighters, what do you do?

Trailblazer - this is why the American doctrine is so fixated on A2/AD or anti-access/aerial denial. How do you move large formations of stealth aircraft within striking range of the Chinese mainland without inviting the Chinese to launch missile barrages to take out the forward basing sites? How do you get the essential, non-stealthy support aircraft, everything from tankers to AWACS, to the forward edge of the battle space where they would be without leaving them to be shot down by the defenders? It's so problematic. How do you keep such a first strike attack from escalating into a MAD situation?

This seems like the bright, shiny thing that has distracted critical thought from the practical issues.

Mound, you're quite right in calling out LockMartin's BS on this.

The other problem with the F-35's long and delayed development is that adversaries had an opportunity to render its "stealthy" design obsolete before it ever sees combat deployment. Stealth is a scam. The Chinese and Russians are already equipping their ships with long-band radars that can spot the F-22 and F-35. The Russians are also developing a new radar system for their T-50 that can spot them too. They hope to roll out this out by 2020 (although there's doubt they'll meet that target).

You may recall as well that Canada's military would be unable to communicate with the F-35 in the Arctic, which is where you'd expect Russian aircraft. Until the manufacturer gets that problem fixed, the workaround suggested is a external communications pod, and there goes your stealthiness!

I don't see why we don't invite the Russians to our fly-off. With the neo-liberal faith in free trade, shouldn't we be looking at all options, including the PAK-FA (T-50)? The Russians gave India a pretty good co-development deal on it, maybe Canada can get in on the action.

Can you imagine the brown hemorrhage they would have in Washington if Canada considered equipping with Russian-made kit?

Yup, it would send the Cons round the bend too. But inviting the Russians to a fly off would be a quick way to get to Boeing and LockMartin's bottom price.

Wow. The stuff people write. If Russia launched any kind of attack against North America, especially one that involved strategic arms, we'd be staring into the abyss of WW3. Whether we fly F-35 or F-18 or F-22 won't matter at all.

Tony Blair said Saddam could launch a chem attack on England in twenty mins, file this intel with that.