Eleven Days to Go and "Leave" Up by Ten Points 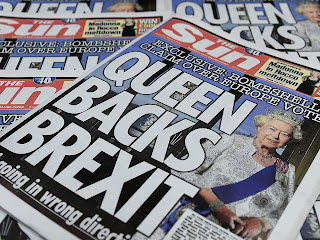 A month ago it looked like most Brits were for staying in the European Union. It was a slim but seemingly stable lead.

Now, with less than 2 weeks to go, a poll commissioned by The Independent finds the leave camp with a 10-point lead. Trying to find out what Brexit would mean to Europe and the UK isn't easy. Opinions are all over the place. Trying to find out how it might reverberate across the Atlantic is that much harder. Apparently it will effect the markets, stocks and bonds, but, like a lot of earthquakes, you'll have to see if that will be a ripple or a tsunami.

Is HMQ really for the leave camp. Apparently so, maybe.

Over at Free Bitcoin you may get FREE satoshis. 8 to 22 satoshis per 5 mins.