A Window into Calamity 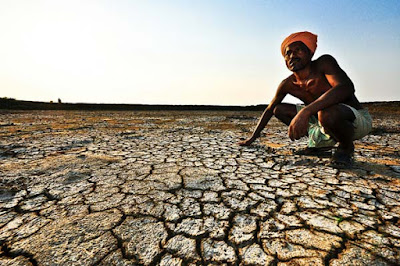 What, in this age of severe climate change, will "calamity" mean?

A Washington State University climate scientist, Deepti Singh, shows what happened during the Great Drought that brought massive crop failures across Asia, Brazil and Africa from 1875 to 1878. Famine claimed an estimated 50-million lives (remember the population was shy of 1.5 billion back then).


"In a very real sense, the El Niño and climate events of 1876-78 helped create the global inequalities that would later be characterized as 'first' and 'third worlds'," writes Singh, who was inspired by "Late Victorian Holocausts: El Niño Famines and the Making of the Third World." The book details the social impact of the Great Drought and subsequent droughts in 1896-1897 and 1899-1902. Its author, Mike Davis, is a distinguished professor at the University of California, Riverside, and a co-author on Singh's paper.

...The Great Drought actually was several droughts, Singh found, beginning with a failure of India's 1875 monsoon season. East Asia's drought started in the spring of 1876, followed by droughts in parts of South Africa, northern Africa and northeastern Brazil. There were also droughts in western Africa, Southeast Asia and Australia.

The length and severity of the droughts prompted the Global Famine, aided in no small part by one of the strongest known El Niños, the irregular but recurring periods of warm water in the tropical Pacific Ocean. That triggered the warmest known temperatures in the North Atlantic Ocean and the strongest known Indian Ocean dipole—an extreme temperature difference between warm waters in the west and cool waters in the east. These in turn triggered one of the worst droughts across Brazil and Australia.

Because the drought was induced by natural variations in sea-surface temperatures, says Singh, a similar global-scale event could happen again. Moreover, rising greenhouse gas concentrations and global warming are projected to intensify El Niño events, in which case "such widespread droughts could become even more severe."