For Someone Who Claims She's "No Quitter," McKenna is Sure Quick to Throw In the Towel. 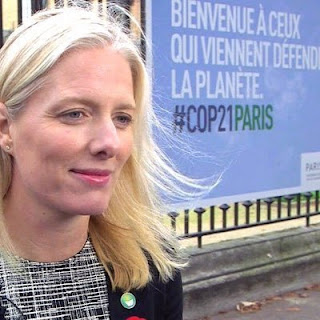 "Bleat, bleat. Bleat, bleat." That's about as much sense as you'll get out of Canada's environment minister, Catherine McKenna.

The latest and most worrisome report of the Intergovernmental Panel on Climate Change didn't cut much ice with Dame Cathy.  Responding to the IPCC demand for an overall reduction in greenhouse gas emissions of 45% by 2030, Cathy said there'll be no change to her government's already pathetic climate change initiative.


In an interview with The Canadian Press recently, Environment Minister Catherine McKenna said she knew the IPCC report would say "we're not on track to be hitting 1.5 degrees."

"We acknowledge this and we all know we need to do more," she said. "That's why the Paris agreement is set up the way it is. Every country in the world needs to take action, and then we need to be more ambitious about the action we are willing to take."

But Canada has no immediate plans to increase its own ambition. Instead, the focus is on implementing the current plans, which include a national price on carbon, eliminating coal-fired power plants, making homes and businesses more energy-efficient, and investing in clean technologies and renewable energy.

No, Cathy. We all know that you and the prime minister you work for need to do more, way more. And you need to start in a major way now. We don't have time to waste, Cathy, on a pissing contest with the premiers over a laughably inadequate carbon tax. 2030 is twelve years away, the blink of an eye in governmental time frames. You've had the reins for three years and you've got bugger all to show for it.

There's only one way we have even a hope of achieving the 45% by 2030 prescription and that demands that we abandon fossil fuels, starting with the dirtiest, highest-carbon garbage - thermal coal and bitumen. Your government's reckless pursuit of flooding world markets with every tanker load of bitumen possible for forty, fifty, perhaps even sixty years to come undermines the world's hope of somehow achieving that bottom line target. You and your prime minister are in bed with the Barons of Bitumen.

Can’t wait till we hand this over to 5hevScheer team.


It's a continuum, Anon. Harper ran with the bitumen baton and then passed it to Trudeau who just kept running with it. Who gets it next is anyone's guess. The numbers we've been getting suggest Trudeau can handily beat back Scheer.

If anything,the IPCC report sets the stage for more forceful civil disobedience. Trudeau will have to ruthlessly crush that. I know he comes across as a nice guy but I think he could do some dark things if he faces serious defiance.

McKenna always talks about the plan or plans. The plan is that Canada won't do anything until the US does. Oh we can have a carbon tax but, golly gee, those nasty Provinces won't do it so don't blame us.

Nothing knew here either! Anyong


Anyong, I think you mean 'nothing new here.'