America Returns to Regime Change. Is That What Nikki Knew? 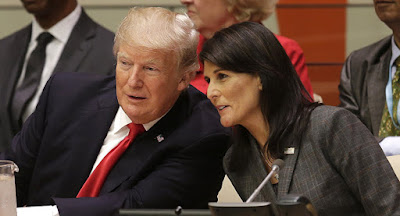 Even top Trump advisors were taken by surprise when Nikki Haley abruptly announced she was resigning her post as UN ambassador. Something must be up, but what?

McClatchy News says America is about to return to the bad old days of regime change. Only this time it'll be "Smash and Grab."

Haley could handle it, of course — she gives as good as she gets. However, it might just be a good time for her to be sipping mint juleps on a South Carolina back porch as this administration executes a more-assertive foreign policy — one the United Nations will not look upon kindly.

The Trump administration is actively advocating for and catalyzing regime change in several countries, but with no plans to participate in follow-on nation building.

The administration clearly is disregarding Colin Powell’s famous use of the Pottery Barn rule, “You break it, you own it.” There are plenty of plans to break Iran and Venezuela, for example, but no clear plans to take ownership for the nation building that needs to follow any traumatic or violent event in an already-struggling society.

In fact, the plans in place follow a new type of rule: call it the “Smash and Grab” — something familiar to urban dwellers who regularly suffer car break-ins, find shattered glass in passenger-side gutters and lose valuables in snap-heists.

In the foreign-policy arena, the United States tries to pull off smashing an odious sitting regime such as Iran’s murderous dictatorship. The means? The use of proxies and allies to apply concerted force while applying joint sanctions to stop trade and revenue.

What follows the smash is the promise of grabbing valuable resources from the subject nation. In both Iran and Venezuela, the plan appears be to “take the oil.” Smash the country, grab the oil.

During the 2016 presidential campaign, Trump lamented America’s failure to grab the oil after the United States expended so much blood and treasure to overthrow Saddam Hussein and rebuild Iraq. In fact, the United States ended up losing the entire country to Iran as Iraq’s ruling minority Sunnis were disbanded and disgraced. What replaced Hussein was an Iran-allied Shiite Iraq, a country that sold its oil futures to France and China while building a sacred bond with ruling Iranian theocrats, militias and intelligence.

...All signs point to an American policy and practice that will leverage willing allies and new friends in far-off regions to use their own militaries, money and political machinations — not America’s — to achieve U.S.-desired outcomes. It’s Trump’s version of “leading from behind” that will likely leave behind a big mess.

What was Einstein's definition of insanity?

There won't be a war with Iran or Venezuela for the same reasons.

US Ground Forces are tapped out. The US has 7,800 troops ready for deployment. 1 lightly equipped Airborne Brigaide, 1 medium Marine Stryker Brigaide. In a years time they will have another 9200 available in the form of 1 heavy Armoured Brigaide.

Iran has 420,000 Ground Combat forces available along with some 250,000 Irregulars. Venezuela has 500,000 along with an unknown number of Irregulars.

US Air Combat aircraft are tapped out. 1:5 is airworthy, only a percentage of those are Combat Capable, the F-35 "fleet" is grounded and the F-22's are all deployed on current missions.

The US Navy is tapped out, over deployments have lead to untrained crews, unmaintained vessels and systems, collisions and deaths.

The biggest problem aside from that, is the US has no allies.

The US has been trying to organize military action against Venezuela since 2010, and none of the US Allies and Client States in the region want anything to do with it.

In the Middle East, the US has lost Turkey, Oman, Iraq and Qatar. Both Oman, Turkey and Qatar have US Bases and supplies that will be quarantined.

Saudi Arabia's a bit busy in Yemen fighting the Hadi/Houthi Alliance, fighting the UAE for Aden, fighting AQAP with only al Quida for allies.

The UAE's a bit busy in Yemen fighting the Hadi/Houthi Alliance, fighting the saudi's for Aden, fighting AQAP with only al Quida for allies.

Israel's tied up in the Golan, Syria, the West Bank, Gaza and with Hezboallah.

Egypt's a bit busy in the Sinai, the border with Lybia, Lybia and repressing Egyptians.

Iran, the EU, Russia and China set up a FinCen to leave Iran immune to the actions of the US Fed.

The second stage of Bolton's big plan is Oil Sanctions.

This relies on Saudi Arabia pumping enough oil to keep prices low, but the Saudi's are cash strapped and probably are no longer capable of pumping at the rate needed to forestall an Oil Crunch. Witness their attempts to strangle Fracking with low prices and volume.

The third stage, is a Shipping Blockade. That's an act of war and probably beyond the ability of the US and it's existing allies. The Tanker War required all the NATO Navies, SEATO, the Gulf States, Saudi Arabia, the Soviet Union, the Warsaw Pact and Iraq, during the Iran-Iraq War, and it didn't stop Iranian Oil Exports.

All those countries are either not interested, or busy elsewhere.

Then, the Moustache of War, John Bolton, and the other Iranophobes in the US, the Iranian Government will be so weak that a "swift kick", ( cruise missiles, airstrikes) will cause their collapse.

While the Joint Chief's and the Pentagon can't do anything about the Sanctions, they will slow walk war plans until after the Midterm winners are seated, and if the ReThugs hold the Senate, will hold out until February 2020.

There won't be a shooting war.