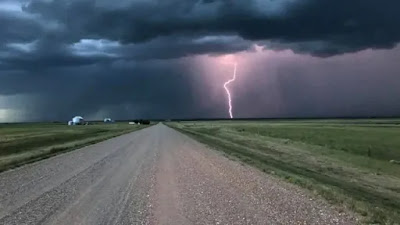 It's the second largest carbon energy producer in Canada and it sure acts like it. The National Observer has an expose on how the government of Saskatchewan looks the other way while Big Oil and Big Gas poison its people.

An investigation by the Observer, the Toronto Star, Global News, Northeastern and Harvard Universities, the University of Regina and Concordia's Institute for Investigative Journalism uncovered the all-too-cozy partnership between the government of Saskatchewan and the Fossil Fuelers, often imperiling the people of Saskatchewan.


Provincial air quality standards have been breached hundreds of times since 2014, but those living nearby...were not warned and oil companies responsible for some of the emissions have faced no charges or fines.

Saskatchewan, Canada’s second largest oil-producing province, has not levied a single fine, the investigation — called the Price of Oil — has found. And only once in the past three years have government workers shut down a well because of potentially deadly hydrogen sulphide (H2S) emissions.

This is the sort of thing that's normal in a Third World petro-state. It's obscene when it happens, repeatedly, persistently in Canada. This was commonplace during Brad Wall's watch and it carries on under Scott Moe. Not surprisingly, both of those conservative bastards were/are staunchly opposed to carbon taxes.

When you hear stories like this, you wonder how the governments can sit idle while their citizens are being poisoned. I don't know how some politicians (and corporate CEO's for that matter) can sleep at night.

From what I understand, it’s all about strategic insights, trusted relationships, interconnections and inextricable links.

“Brad offers Osler clients his strategic insight and guidance, particularly in relation to the energy and agri-food industries. In addition, clients will benefit from Brad’s extensive understanding of the interconnection between business, politics, and trade, on a global scale.”