Michael Harris - On Climate Change, Canada Talks the Talk But Crawls the Walk 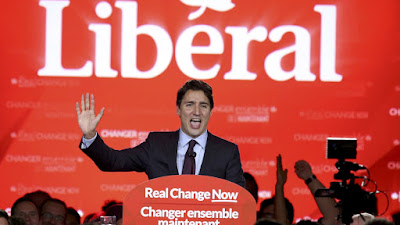 
To believe what a politician says when she’s campaigning to become the government is a little like believing Donald Trump on a bad day — rational optimism that’s slipped its moorings.

Just as voters focus on their self-interest, most politicians wind up focusing on re-election — not on the grand enterprise of doing the right (and sometimes difficult) thing, with power. Long-term thinking is rarely, if ever, rewarded at the ballot box, which is why we have so many short-term political thinkers.

Ultimately, the failings of voters pale beside the failings of these politicians. According to the UN’s major new report, there are just a dozen years or so for governments around the world to get it right. After 25 years of rhetoric, the failure on this matter continues. The name of action on the environment is consistently lost in the heat of resolve.

According to the UN report, based on 6,000 scientific references from 40 countries and 91 authors, it comes down to this: Either countries ditch coal and fossil fuels in the next decade or so, or Earth begins the irreversible slide into planetary chaos. Hurricane Michael has just left the future’s calling card with millions of people living on the Florida Panhandle.

The scientists who produced this dire UN report realize they’re virtually asking the impossible from governments: a rapid economic transition from carbon economies to cleaner energy so “abrupt,” it has “no documented historic precedent.”

Unmasking the Dauphin, Our Fake Eco-Warrior


Canada talks a better game than Trump. Who doesn’t? But this country’s record under Justin Trudeau has been more than dubious; it’s been dreadful.

Just this week, Canada’s environment minister appeared on Vancouver CBC. As bright, articulate and telegenic as she is, Catherine McKenna came off more like the minister of finance or fossil fuels than the person leading the war against global warming.

Defending the government’s massive energy project in Kitimat, McKenna said that switching energy sources can’t be done overnight, and that LNG was a “transition fuel.”

Yet if you take methane emissions associated with LNG into account, it’s not a transition fuel; it’s worse than coal. Operating at full capacity, this project will put a large amount of carbon into the atmosphere each year. Estimates have run as high as 93 and as low as 3.5 million tonnes. If the Pembina Institute’s estimate of 8.6 million tonnes is correct, LNG Canada derails British Columbia’s climate action plan.

Coincidentally, another of the Trudeau government’s justifications for LNG exports is to help get China off coal.

But if that’s true, why doesn’t Canada do what the state of Oregon has already done: pass laws banning coal-fired power production by 2035, and double renewable energy sources by 2040?

Instead, Canada continues to mine coal and ship it abroad through the port of Vancouver to Japan, South Korea and, yes, China. The most recent published figures for Canadian coal exports show that 76 per cent of it goes to Asia. Does that sound like trying to wean anyone off of coal to you?

He's Spinning So Fast It's a Surprise He Can Stand Up.


When McKenna rightly points out that dumping fossil fuels “overnight” is not possible, she forgets to add that commencing the dumping of said fuels is “overdue” — at least according to the science. The last time I looked, basing public policy on sound science was supposed to be a hallmark of Liberal governance in the post-Harper era.

The reason that politicians like McKenna, and her counterparts around the world, don’t get it, is that getting it means taking serious hits to the gross domestic product and employment.

When Trudeau announced the LNG Canada project for Kitimat, it was all about “big”: big numbers, big investment, big employment, big sales pitch.

The PM talked about 10,000 jobs, even though, when the construction phase is done, the real number will be tiny. In making the announcement, Trudeau sounded more like former B.C. premier Christy Clark than the man who told the world in Paris that Canada was back on the environmental file.

We're All Environmentalists Now, Or We Should Be


If the scientists have it right, the house is on fire and leaders around the world are busy rearranging the furniture in the living room. Since the politicians won’t be putting out the blaze, it will be left up to voters to get the big picture right and vote accordingly in 2019.

And the big picture is this.

Environmentalists are not a special interest group, like those who support ballet, opera or racing cars. Air, water, soil and biodiversity are essential to human survival and transcend political parties and corporate interests.

Getting serious about carbon emissions by 2050 just doesn’t do it anymore.

We are all environmentalists now.

2030, the date by which the world must slash CO2 emissions by 45% is just three electoral cycles away. There's no time left to put up with more of this forked-tongue nonsense from Liberals and Conservatives.  We've run out of time for that and it's the only song they know.

In terms of governance we need to vote Green, give them enough seats that they can hold an effective balance of power in a minority Parliament, enough sway on the floor of the House of Commons that they can bend the next government, Liberal or Conservative, to the desperate needs of our nation and our people or else throw them out and bring in the next bunch until they come to their senses that they represent Canadians, not a high-carbon special interest group.
Posted by The Mound of Sound at 12:27 PM

Somehow "experts" are omitting the fact that CO2 is stateless and gosh, even worse, not traceable to the individual folks.
Working together, pitching-in, sharing the load, yada, yada, yada is doomed - not unlike communism.

Your reply Mound, however thoughtful, did omit the reality of the fact that CO2 is a gas which do not respect any borders.
The other reality is that the communism, the best social system invented so far by humankind (at least on paper) failed to get any significant permanent traction.

More blather from the joylessly moronic posse of anonymous dorks. If we could convince them all to move to south Florida and live in tar paper shacks on the beach the world would eventually be better off.

And don't count on the Conservatives, NDP or Greens.