"Screw Your Optics, I'm Going In" 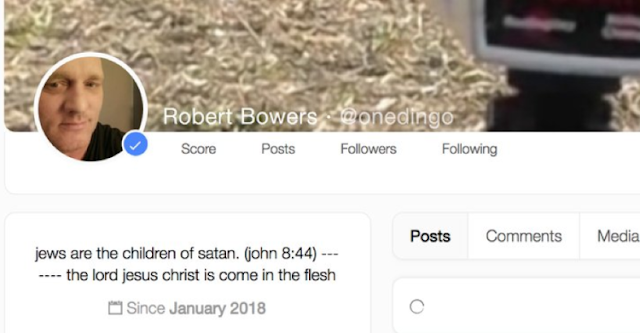 Another incident of domestic terrorism in the Hateful States of America. This time a synagogue in Pittsburgh. Eight dead plus about a dozen wounded. True to course, the killer was a right-wing extremist armed with an AR-15 assault rifle.

That apparently was enough for Robert Bowers.


The person identified as Robert Bowers on Gab.com posted this morning that "HIAS likes to bring invaders in that kill our people. I can't sit by and watch my people get slaughtered. Screw your optics, I'm going in."

On or around Oct. 10, the same person wrote, "Why hello there HIAS! You like to bring in hostile invaders to dwell among us?

...In recent days, Robert Bowers vigorously posted anti-Jewish posts and wrote several of his own. He did not favor Donald Trump, endorsing posts suggesting that the president was controlled by Jews and writing that he "is a globalist, not a nationalist. There is no #MAGA as long as there is a kike infestation." He also wrote that he was "glad the overwhelming jew [sic] problem has been solved so we can now fight with each other."

He wrote a week ago that he "noticed a change in people saying 'illegals that now say 'invaders' I like this." He also called one poster a "deceptive little oven dodger" in response to a post debunking a rumor that trucks marked with the Star of David were bringing Central American migrants to the U.S.


People on Gab vigorously responded Saturday to news that the suspect may be one of their own.

"So Robert Bower hated Trump and Jews. Such a low life," wrote one.

"Robert Bowers went in because he has the time preference and impulse control of a Subsaharan African, and because anonymous faggots on social media who would never stand with him in battle got him all gassed up," wrote one poster.

"Robert Bowers went in because Whites are being displaced by Jewish immigration groups," another responded.

Jewish Family and Community Services is listed on the HIAS website as a partner of the organization. The website indicates that JFCS and three Pittsburgh congregations were participating in the group's awareness campaign last week: Beth Shalom, Dor Hadash and Makom HaLev.

Dog-Whistle Trump naturally weighed in, volunteering that this massacre had nothing to do with gun control and apparently blaming the synagogue for not having a squad of armed guards on duty.

That is sickening! Anyong

Radio Rwanda's broadcasting from inside the White Supremacy House, and the ReThug Party.

One really sickening thing is that though these right wing antisemitic loonies are increasingly dangerous, Israel allies with them. In a bizarre way, the racist Likudnik right sees eye to eye with the racist, antisemitic Republican right. More pragmatically although equally disgracefully, Israel seems to have concluded that encouraging international antisemitism is in Isreal's interests because a scared world Jewry is an Israel-supporting world Jewry.

And so you get Israel howling "antisemitism" every time someone suggests the idea of human rights for Palestinians, but carefully minimizing comment about murderous, genuinely antisemitic racist sickos.