Well Why Didn't You Say So? 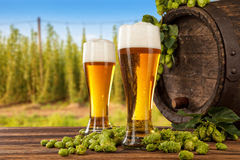 Stop the presses! A new climate change catastrophe is unfolding and this one changes everything.

Climate change is threatening global beer production. Yeah, you heard that right, beer, brewskis, the golden nectar of the gods. If you thought you were going to get away with a few extra cents a litre at the gas pump, think again buster.

Trouble is brewing for the world’s beer drinkers, with climate change set to cause “dramatic” price spikes and supply shortages, according to new research.

Extreme heatwaves and droughts will increasingly damage the global barley crop, meaning a common ingredient of the world’s favourite alcoholic beverage will become scarcer. Key brewing nations are forecast to be among the worst hit, including Belgium, the Czech Republic and Ireland.

...Even in the best-case climate scenario, with rapid and deep cuts in greenhouse gases, beers drunk in Ireland, Belgium and the Czech Republic would fall between 9% and 13%, with similar drops in Canada and Germany.

Looking at the impact on price, the research found that [coal-friendly] Poland’s beer drinkers would be hardest hit in the worst-case scenario, with the cost rising almost fivefold. In Ireland, Belgium and the Czech Republic, prices would double. These nations would be most affected because they brew and drink a lot of beer and import most of their brewing barley.

"Save our Beer!" may be the call that starts moving us in the right direction.

.. well.. its not only a thorny issue.. its quite logical. Drought, extreme heat - barley in the field will struggle to survive.. so beer drinkers will be extremely alarmed, riot even. But extend the logic and what else might thrive? Agave cactus ? Opium poppies ? But in reality is anyone alive to drink the beer that won't grow ? Wheat canola, oats, alfalfa, peanuts, corn.. and on thru the food chains - fruit (so no wine) streams poisoned by fracking aint supporting fish anyway - they died way back & the wells are dry, thus the aquifers, people are mostly gonza plus they ate all the livestock, poultry.. Its doom and Dune.. another planet Arrakis ! Land of fhe Proud Boys - oops, the Canadian Infidels to dumb to die, now eating lichen if the arctic kimodo dragon lizards don't get them first. The oceans are a veritable soup of single cell organisms. Either of us could write these horror scripts Mound.. when the Rapture never came & the bears got there first anyways.. hell, a bear's gotta eat eh ? And bears, turkey vultures, hardy wolverines, cockroaches and land rats won't eat money or bitumin. Some clever trevor folks are surviving (for now) deep in The Kidd Creek Mine where there's precious water below 4,000 feet down.. but no light.. On the plus side, they're sheltered from radiation from the Pence/Hannity Holy nuke war vs China that kicked over the whole shebang.. and the intense ultraviolet rays since the troposphere (or was it the ionosphere) got fried..

Except the savior could be the Island of Newfoundland. Who knew? Anyong


Now that so many of our Nobel-grade amateur agronomists will no longer be furtively growing weed, perhaps they can turn their talents to hops.