But, Your Honour, I Vas Only Following Herr Trump's Orders. 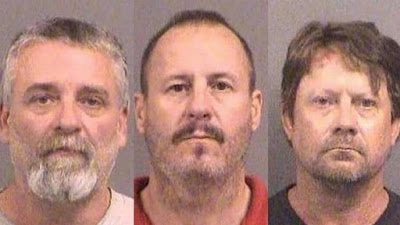 Their militia was called the Crusaders and their mission was to slaughter Muslims living in Garden City, Kansas. They planned to wage a bombing campaign the day after Donald Trump was elected president of the United States.


That’s why the defense, arguing that the men on trial had been influenced by 2016 campaign rhetoric — though whose, they never spelled out — tried to pack the jury with as many Trump voters as possible. In a motion the judge rejected, they wanted voters from redder counties in western Kansas that went even more heavily for the president in 2016 included in the jury pool.

And it’s why they cast the defendants as martyrs for free expression. James Pratt, a lawyer for Patrick Stein, who referred to Muslims as cockroaches and to himself as an “Orkin man” exterminator, put his free speech case this way: “We all have the right to hate.”

Melody Brannon, one of Curtis Allen’s lawyers, even made it sound like the liberal FBI is against the Second Amendment. Allen “was a member of a militia. He loved his guns. This was a lifestyle. The government tried to criminalize that lifestyle.”

The attorney general sided with his own Justice Department, and with the jury, which found Allen, Stein and Gavin Wright guilty of conspiring to use a weapon of mass destruction and conspiracy against rights.

But they're not done yet. Now they're arguing that the judge should show them leniency in sentencing because their poor minds were poisoned by rightwing media and Donald Trump's anti-Muslim rhetoric.


Lawyers for convicted domestic terrorist Patrick Stein, who had planned to bomb a Kansas mosque and apartment complex where Muslims lived the day after the 2016 election, are offering a charming argument in advance of his sentencing hearing Friday: They say he should get less than 15 years in prison -- instead of a potential life sentence -- because Donald Trump and rightwing media poisoned his brain against Muslims, so he honestly thought he was acting on the orders of his chosen presidential candidate.

Boy, lawyers that good don't come cheap. I'm only kidding, they do. Trying to pack the jury with Trump supporters, arguing in defence the First Amendment (martyrs for free speech) and the Second Amendment (exercising their Consitutional right to blow up Muslims?), takes a lot of balls and very, very little cranial power.

One can only wish that the judge sentence these lawyers to share cells with their clients.