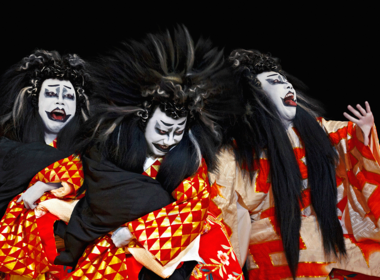 "Kabuki theatre" has become a synonym for political posturing and, when it comes to federal and provincial politics and climate change, it's pure Kabuki theatre all round.

Andrew Scheer has a magical climate change policy that's so obscure even he can't explain it. It's apparently based on bringing manufacturing back to Canada where it can all be done much more cleanly than it is now. They don't call him Chuckles for nothing.

Jagmeet Singh has some climate change ideas but, hey, it's Jagmeet Singh and the NDP so no one's really listening.

Then there's Justin, who is loosening his tie, rolling up his sleeves, and preparing to unleash carbon taxation on Canada. That too is mainly political posturing. Why? Because it's a token tax, a minuscule fraction of the taxes necessary to make a meaningful impact. A little smidgen. And certain big emitters are being exempted. (You must do those sleight-of-hand things if you really need to pretend bitumen trafficking is a profitable enterprise.)

Is Justin's heart even in this? I don't think so. If it was, why would Trudeau be making Andrew Scheer's argument for him?

One of the pet arguments of climate denialists, Fossil Fuelers, and conservatives alike is that it's nonsense. Canada doesn't matter. We're too small to make a difference. Nobody will even notice.


Trudeau has been grilled by the NDP for failing to raise emissions targets previously set by the Conservative government under Stephen Harper. The prime minister told the studio audience in Montreal that bumping targets would make a negligible difference.

"Even if Canada stopped everything tomorrow, and the other countries didn't have any solutions, it wouldn't make a big difference," he said in French. Trudeau contrasted the Liberals against the Conservatives, suggesting a price on pollution is better than offering no ideas on the environment.

It wouldn't make a difference even if we stopped burning fossil fuels tomorrow. Andrew Scheer should send an honorary CPC membership for that one.

The problem with Trudeau's admission, other than it plays straight into the hands of his Conservative challengers and the fossil energy giants, is that it is the type of sophistry that invites other nations to play.

Sure, we're just 0.5% of the global population. But what Trudeau's backpeddling argument omits is that our meagre half percent produces 1.6% of global greenhouse gas emissions. We are pigs at the carbon trough and when Trudeau says who cares, we're justifying every other nation saying "me too."

It's not that Trudeau misspoke. I found this very same argument alive and well on Environment Canada's web site last week. I had trouble grasping how a Liberal environment ministry would perpetuate this supremely Harper-esque argument but there it was on my computer screen. Same, same.

It all adds up. This specious argument, the paltry amount of proposed carbon tax, the industry exemptions and the government's absolute refusal to consider a carbon export tax on filthy fossil fuel we ship overseas, leave little doubt that, while they may not be climate change deniers, they are climate frauds. This is Kabuki theatre for the Liberal rank and file.

And, if you still don't get it, ask yourself just what our governments are doing on climate change adaptation? What are they doing to bolster the nation's resilience to withstand climate change impacts that have already arrived and the much worse stuff that's looming? What are they doing to prevent us from being overtaken, unprepared by catastrophic climate events? Just what economy will we have when our outdated, decaying but critical infrastructure meets climate change that it was never engineered or constructed to withstand? And how many billions of grants, subsidies and other benefits are they still bestowing on the Bitumen Barons year in and year out? The IMF has pegged it as somewhere between $34 billion and $42 billion for Canada alone. What would $42 billion a year in infrastructure overhaul look like?

I have never understood the concept of "revenue neutral" carbon tax. What's the point? If the money is going to be handed back to people they can just use it to buy more gas, oil or coal. If the money is used to subsidize carbon industry the tax accomplishes nothing. A carbon tax can only work if it hurts enough to persuade people to change their behaviour.

Your "Kabuki theatre" is a good analogy. The Trudeau-McKenna carbon tax is just entertainment.


The revenue neutral part, Toby, is an admission that asking the public to make a tangible sacrifice in the fight against climate change is a non-starter. A segment of the population will revolt if there's no promise to refund their tax with a little extra to boot.

We've heard loads of horseshit about how the TransMountain pipeline will bolster Canada's green future. If that argument was to have any legitimacy, the federal government would have to pledge that any royalties it received from bitumen exports would be used for climate change adaptation or mitigation. Once it goes into general revenues, as planned, the scam is revealed.

Our mildly entertaining Kabuki theatre here is a pale reflection of the one south of our border.

But there is 'hope'.

Nuclear war could make all climate change worries redundant:
"They say the US withdrawal is likely to prompt an arms build-up by both China and Russia, which would in turn affect defence and security considerations for the rest of Asia.

“[Cancellation of] this treaty is a serious problem for Japan’s national security. The treaty has played a role in regional peace and stability, arms control, and disarmament,” said Japan’s chief cabinet secretary Yoshihide Suga on Monday."

(Story is top headline in Hong Kong, buried here in the west while we enjoy the kabuki.)


NPoV - thanks for the link. Trump is indeed undermining the Atlantic world order. He feeds suspicions that he's in league with others whose prime interest is in dissolving that union.

We have to begin somewhere, Mound. The problem is that we have very little time to get where we should be.

Your fellow countryman Ian Welsh (whom I read regularly) just wrote an excellent brief essay that I think sums up the what we are facing pretty well:

Bend Over And Kiss Your Ass Goodbye: IPCC Report Version