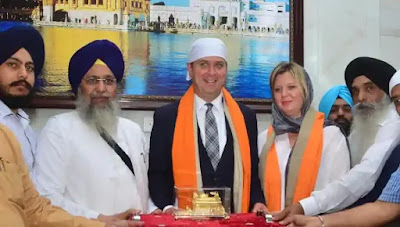 The Globe editorial board has torn a strip off Andrew Scheer for his antics in India.


The Conservative leader is shunning pious photo ops at prominent temples and has not yet been filmed dancing.

If anyone was in danger of missing the point, Mr. Scheer has been happy to drive it home in interviews with Canadian media, repeating the word “serious” like a tic in an unsubtle effort to throw Mr. Trudeau’s jaunt into relief.

The prospect of the Opposition chief using his time in India for partisan point-scoring has loomed since this summer, when the visit was announced as a bid to “repair” the damage Mr. Trudeau had wrought. The possibility irked then. It has been even more grating to see Mr. Scheer go through with it.

Opposition leaders are entitled to travel for research – indeed, it’s a good idea, in case they find themselves in power one day – but they have no business running a parallel foreign policy or trying to undermine their country’s leader with veiled jabs on foreign soil.

But that is just what Mr. Scheer is doing – just as he did on a similar trip to Britain earlier this year. Speaking from New Delhi, he proudly told reporters about touting his plan to revive the Energy East pipeline and ship more Canadian oil to India in a private conversation with Indian Prime Minister Narendra Modi.

You don't need to be a fan of Justin Trudeau or his Liberal Party to know that Scheer has gone way over the line, again, and has once again proven that he's not fit to lead this country.,
Posted by The Mound of Sound at 10:13 AM

Unless of course you are a conservative or whatever the fucking idiots that voted for DoFo in Ontario call themselves.

Christ we live in crazy times.


Yeah, Willy, that's true enough. Ever wonder how we found ourselves herded into camps so irreconcilable, paranoid and hostile to each other? I have never thought, even in the early stages, that was inadvertent.

Andrew Scheer is another Conservative that has his own interests in mind.

.. the bizzaro spectacle of the so called 'conservative' (Royal Reformertory Rump Party) 'leadership' convention led to an obvious conclusion. They needed a housekeeper 'leader' not named Bernier to occupy Stornoway for 8 years.. At least that was my appraisal. And who knew the NDP would essentially disappear themselves in their haste to dump Thomas Mulcair & annoint wunderboyo Patrick Brown & his 'brain trust'

Keep in mind now, after his wondrous & spectacular political implosion, Patrick Brown wandered off to India for some sort of 'working' holiday (I was not aware he actually has or had a 'job' ie 'work'..) and recently, Jason curry in a hurry Kenney made an ass of himself over there.. so why not Andrew Scheer as well ? I saw a recent ad on tv where he extolls his exemplary mom's work ethic, a nurse I believe.. but soon wanders into a smarmy lecture to some captive horde.. how he wants his attributes & actions (aspirational only, one assumes) to be "his legacy to Canada" .. I kid you not !

Anyway. its easy to see why Harper plopped this grinning, dimpled & posturing dullard in The Speaker's throne. A Queen like Harper must have drones y'know. Presumably Scheer brought along a photog and a video person to India.. ensuring exciting, completely misleading 'leadership' footage to spoon feed Mainstream Media. Kudos to The Globe for ripping him.. and we can hold our breath and await the fawning Party praise for the 'repair job' and the saving of Canada's foreign policy & future dilbit exports. Bring on Gladu, Poilievre or Bergen

One assumes that when Scheer mentions exported Canadian Oil he actually is referring to diluted tar sands bitumin. After all, he is on record claiming dilbit is the finest, cleanest, most efficient energy source on planet earth. He also wishes Canada would revive the Energy East pipeline to St John aka 'east coast tidewater'.. and all will be well.. surely he espoused this to India's Prime Minister during their tete a tete ! ! And hopefully he mentioned how the coking residue - 'petcoke' is another similarly combustible 'energy source'

The logic of reviving Energy East to send oil to India escapes me.

It's a bit hard to remain civil on the issues, when for example, one's position is LBGTQ advancements are great, Indigionous rights are great, and all these new Immigrants are making the economy and Canada shine,

and the other side want's to go back to when they could be hunted for sport.

Places in the past, where the Liberals and Progressive Conservatives could have found common ground, like keeping Billionaires Billionaires, or Pipelines, the Con's attack from the right, for not being Nazi enough.

I don’t claim to be an expert on India or even fully informed on what Trudeau was doing over there.

But more and more it seems to be clear that the Canadian/Ottawa media which wailed incessantly about the disastrous Trudeau India trip didn’t really have a clue what was really going on over there.

Just like those who attacked Freeland over and over about her human rights Saudi teweet, and now have to admit their obsequious bowing to the Saudi’s hurt feelings was absurd and embarrassing to the Canadian media.

"Just like those who attacked Freeland over and over about her human rights Saudi teweet, and now have to admit their obsequious bowing to the Saudi’s hurt feelings was absurd and embarrassing to the Canadian media."

They will make no such admission.

As long as the Media Whores are being paid, they will stay bought.

Modi is very right wing and is currently selling off Indian farmland to US agribusiness for monoculture - Monsanto and Bayer figure large. Colin Todhunter has been writing on the matter for a long time - he's a Brit who lives in India. Modi also agreed to the elimination of cash in India some two years ago - the trial run eliminating small denomination banknotes was a complete disaster. So of course our Cons run over to India to bloviate and rub shoulders with the current idiots running the place - the right is in love with itself.

Since Quebec will never allow Energy East to traverse its territory, we can be certain that Scheer is talking through his hat for effect, well aware that the Indians won't have any more clue about our politics than we in general know about theirs. So he can pile the bullshit high with no consequence and have a ready excuse when it doesn't happen.

These people are DERANGED!
Why is Stephen Harper whispering in Donald Trump's ear about dairy boards?
Why is Rob Ford running down to Washington to hit rewind and repeat of the same play?
Why is Scheer creating confusing policy abroad?
Treason.
I don't get how this is even allowed to happen.

.. for Rumley Fips .. Energy East 'oil' that was dilbit, was always bound for Houston ..
where coking and refining exists. Any higher grade drilled or fracked western oil
could be included in pipeline batches, but plenty of domestic refining exists for that
in Ontario, Quebec, Maritimes.. for pre-export refining

Jagmeet and Andrew are living proof that hapless Jr has the world's biggest golden horseshoe lodged deep within his anatomy.

It's all one big arse-up.