The Bastards Aren't Even Trying to Hide It.


Fresh from rewarding their ultra-rich beneficiaries with a $1.5 trillion tax cut, Republicans are complaining about the deficit they just created and they're targeting Social Security and Medicare cuts to fix it.

"It’s disappointing, but it’s not a Republican problem," McConnell said of the deficit, which grew 17 percent to $779 billion in fiscal year 2018. McConnell explained to Bloomberg that "it’s a bipartisan problem: Unwillingness to address the real drivers of the debt by doing anything to adjust those programs to the demographics of America in the future." The deficit has increased 77 percent since McConnell became majority leader in 2015.

New Treasury Department analysis on Monday revealed that corporate tax cuts had a significant impact on the deficit this year. Federal revenue rose by 0.04 percent in 2018, a nearly 100 percent decrease on last year’s 1.5 percent. In fiscal year 2018, tax receipts on corporate income fell to $205 billion from $297 billion in 2017.


“When Republicans in Congress said their tax cuts to wealthy multinational corporations would pay for themselves, they lied,” wrote Ohio Congressman Tim Ryan on Twitter. “Now, they're going to try to come for hardworking people to foot the bill by slashing Medicare, Medicaid, and Social Security. We can't let them.” 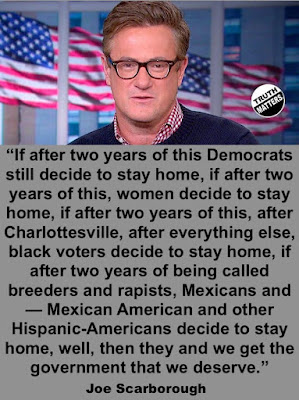 For Republicans, lying is like breathing. It comes naturally.

At least now they’ll put Arthur Laffer back in the drawer.

Mound, you are probably familiar with the writings of Thomas Frank (What's the Matter With Kansas?). Rather than waste his time over the awfulness of the Republicans, Frank is concerned with the constant failures of the Democrats. For example:

"For all their cunning, Republicans are a known quantity. Their motives are simple: they will do anything, say anything, profess faith in anything to get tax cuts, deregulation and a little help keeping workers in line. Nothing else is sacred to them. Rules, norms, traditions, deficits, the Bible, the constitution, whatever. They don’t care, and in this they have proven utterly predictable.

The Democrats, however, remain a mystery. We watch them hesitate at crucial moments, betray the movements that support them, and even try to suppress the leaders and ideas that generate any kind of populist electricity. Not only do they seem uninterested in doing their duty toward the middle class, but sometimes we suspect they don’t even want to win." https://www.theguardian.com/commentisfree/2018/jul/27/liberals-donald-trump-rightwing-populism

So, yes, the Republicans continue to crap on the masses while the Democrats pretty much look away.

By the way, Frank thinks Trump has a good chance of being re-elected. What are the democrats doing about it? Not much.