Can We Please Free Our Minds of Magical Thinking? 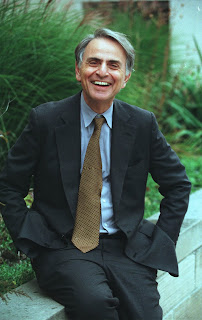 It was over 20 years ago that Carl Sagan wrote, "The Demon-Haunted World." I've only just started reading but I'm already finding it delightful. There's something comforting in his observations and it's always good to come across corroborative beliefs from someone of Sagan's stature.

I don't know to what extent ignorance of science and mathematics contributed to the decline of ancient Athens, but I know that the consequences of scientific illiteracy are far more dangerous in our time than in any that has come before.

Sagan is plainly right and yet we live in a world where, even in the advanced societies, people are succumbing to conspiracy theories and magical thinking, sometimes angrily rejecting knowledge, logic and observable fact. With powerful change overtaking us rapidly, we could pay dearly for ignoring this failing in ourselves and in our leaders.

I like majickal thinking, but I reserve it for escapist novels, not life.