The Case for Climate Pessimism 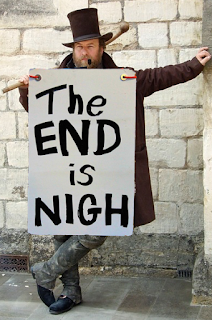 That's the title of an article in The New Republic that, in the wake of the latest IPCC report, wrestles with the merits and drawbacks of climate optimism, "we can still do this," and climate pessimism, "we're screwed." There is a case to be made for each.

This is a tough topic and it was bound to spark emotional outpouring as we reached the point where ignoring it was no longer possible. We seem to be either near or at that point today.

The case for rapidly slashing greenhouse gas emissions - 45% by 2030.


This goal is technically achievable, according to both the report and Paul Romer, who won the Nobel Prize in Economics on Monday for his work on climate policy solutions. “It is entirely possible for humans to produce less carbon,” he said receiving the award, which he shared with William Nordhaus. “Once we start to try to reduce carbon emissions, we’ll be surprised that it wasn’t as hard as we anticipated.” Technological advancements in efficiency, combined with massive cultural shifts toward sustainability, could rapidly reduce human demand for energy. The world’s biggest governments could place heavy taxes on carbon dioxide emissions to reduce the incentive to consume. They could also heavily invest in reforestation, biofuels, and carbon capture, an unproven technology for taking carbon out of the atmosphere.

But very few people, scientists least of all, see these things happening by 2030. “Given the present political debate, I don’t see much chance of these near-term cuts happening, even in places that take climate very seriously,” said Andrew Dessler, a climate scientist at at Texas A&M University. Penn State climate scientist Michael Mann agreed. “As I’ve stated before, 1.5 degrees Celsius is probably not realistically on the table,” he said. “We’re better focusing on achievable targets.”


The pitfalls of hope.


... But it’s folly to rely on hope that is demonstrably false. “The whole idea that everything’s going to work out isn’t really helpful, because it isn’t going to work out,” said Kate Marvel, a climate scientist at the NASA Goddard Institute for Space Studies. Climate change is going to worsen to a point where millions of lives, homes, and species are put at risk, she said. The only thing humans can do is decide how many lives, homes, and species they’re willing to lose due to climate change—how long they’re willing to allow their respective governments to stall on what we know to be technically achievable.

Action relies on courage, not hope. “You shouldn’t need the guarantee of a happy ending to do what you know to be right,” Marvel said. Monday’s U.N. report gives us no logical reason to be optimistic about the planet’s survival, and no logical reason to hope. But pessimism just might convince enough people about the urgency of climate change, and encourage them to find the resolve to join the fight.

I am saddened to say that I am in the 'we are screwed' camp Mound, the best outcome I see is that self defeating actions will in the end save 'mankind' via famine,wars, 'natural' and man made disasters reducing our population to sustainable levels. Not in my life times I am sure but possibly within my sons ..... Pessimistic? you better believe it!

I would like to be optimistic, but worldwide things are not going well. Canada is just embarrassing. The fact that Kenney and Ford had a big rally to oppose carbon taxes suggests there is little to no public will to do anything, even if the Federal government decided to take positive action.

Apes. Many aspire to be more but...apes.

We need to ignore or ideally remove these losers from any input whatsoever.. who really have earned Zero Standing.. to even fling their vapid opinions on Environment, Climate Destruction, Extirpation of Species & Habitat in our faces. Exemplars ? Its to laugh or weep.. how about sellout zealots ? The carbon kings - defenders of the methane escape realms of Canada - sellers of diluted bitumin - the royal families of thrashing supertankers - the clown princes & princesses of pipelines uber alles & proud proclaimers that 'The Economy Must Grow - Evermore'

Please don’t make any cheap ideological comments. It is what it is.
There is zero leadership on climate.
I’d take any of those guys in a second.

If we could get money out of politics, there might be some hope. But that isn't going to happen.