The 2014 Living Planet Report was - or it should have been - shocking. It reported that the world had lost fully half of all land-based life in just 40 years. The culprit? Humankind was to blame by seizing so much of the habitat for human needs.

To make a bit more sense of this let's go back to the early 70s. That's when the human population broke through three billion. That three billion mark had a lot of significance. It was the point at which one species, our very own, began to consume more resources than one planet, Earth, could replenish. It was the point of "Overshoot." The point at which humans breached the planet's ecological carrying capacity. Early 70s, 3 billion.

This graphic illustrates our predicament. The red line is our incredibly voracious consumption. The black dotted line is the Earth's finite carrying capacity (you knew it was 'finite,' right?) Today we're already at the point where the dotted line begins to fall marking Earth's degraded carrying capacity. It was recently estimated that Earth can now sustain a maximum human population of just two billion. That's what happens when the dotted line begins to dive. 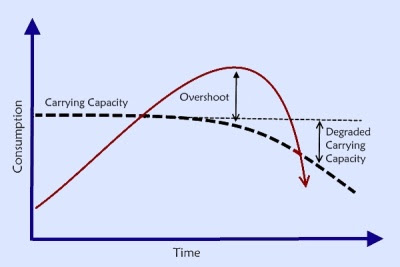 It took us 40-45 years to whittle back the total numbers of terrestrial life by half. Now, in just four more years, we've bumped that from 50% to 60%. Animal life also gets hammered as Earth's ecological carrying capacity plummets. Here's what the 2018 analysis tells us:

The new estimate of the massacre of wildlife is made in a major report produced by WWF and involving 59 scientists from across the globe. It finds that the vast and growing consumption of food and resources by the global population is destroying the web of life, billions of years in the making, upon which human society ultimately depends for clean air, water and everything else.

“We are sleepwalking towards the edge of a cliff” said Mike Barrett, executive director of science and conservation at WWF. “If there was a 60% decline in the human population, that would be equivalent to emptying North America, South America, Africa, Europe, China and Oceania. That is the scale of what we have done.”

“This is far more than just being about losing the wonders of nature, desperately sad though that is,” he said. “This is actually now jeopardising the future of people. Nature is not a ‘nice to have’ – it is our life-support system.”

Our numbers have shot up over the past 45 years. We're now two and a half times as many as we were then when we first exhausted the planet's ecology.

Here's the worst part. Nobody is going to do a goddamned thing about this. Like the 2014 report, it'll be down the Memory Hole within a few days. No one is willing to stop this madness. We're told that our population could hit nearly 10 billion by 2050 (as if). The world is planning for it. Part of that planning is a prediction that our fossil energy consumption will soar by 40% or more by mid-century.

Jared Diamond, in his book, "Collapse: How Societies Choose to Succeed or Fail," writes when civilizations collapse it occurs when they're at their zenith and collapse occurs fairly rapidly. I emphasize the word "choose" because what's happening is our choice. This is the path we have chosen. It's a nihilistic path, to be sure, but we've chosen it.

Several months ago some wild-eyed science type suggested that we should agree to set aside half of the land on Earth for the habitat of other species - 'Mankind Prohibited' sort of thing. It was an idea that predictably went nowhere.

By the way, that 60% figure? Some argue that's unduly optimistic.


Many scientists believe the world has begun a sixth mass extinction, the first to be caused by a species – Homo sapiens. Other recent analyses have revealed that humankind has destroyed 83% of all mammals and half of plants since the dawn of civilisation and that, even if the destruction were to end now, it would take 5-7 million years for the natural world to recover.

The Living Planet Index, produced for WWF by the Zoological Society of London, uses data on 16,704 populations of mammals, birds, fish, reptiles and amphibians, representing more than 4,000 species, to track the decline of wildlife. Between 1970 and 2014, the latest data available, populations fell by an average of 60%. Four years ago, the decline was 52%. The “shocking truth”, said Barrett, is that the wildlife crash is continuing unabated.

A few weeks ago there was someone on the radio plugging a theory that Canada should grow to one hundred million people. Oh people say, Canada has lots of room. Ask anyone. When we fly over Canada we can see lots of empty space. Unfortunately, it's not exactly empty. Wherever we look there is something or someone already occupying that space. When humans move in we do so like locusts and army ants; we swarm and consume and/or destroy everything in our paths. Every house, barn, store or sky scraper, every road or highway, even bycicle paths represent places that used to belong to plants and animals. The question becomes, how much more destruction will we tolerate in order to grow our population?

Personally, I think Canada is already over-populated. Put simply, we cannot feed ourselves. Prior to about 1960 almost every small town was food self sufficient and most cities depended on outlying farms.
Since then suburban development became more profitable than farming so the farms were ripped up, built upon and paved over. We now depend on very long haul sources for food. When the corporate food chain is unable to source from suppliers suffering from drought, fire or flood Canadians will have to adjust their diets.


Well, Toby, we're certainly steering our grandkids toward a somewhat dystopian future. And we're getting really good, astonishingly good, at looking the other way.