Cambridge Analytica - "In the Beginning" 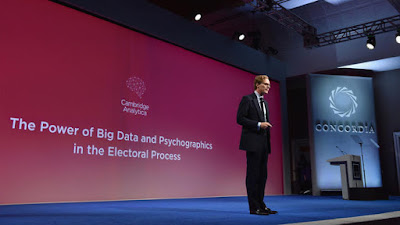 It began as a means to thwart Islamist recruitment. But then...

Here is Chris Wylie describing how they built the technology that came to be diverted into the effort to skew Brexit and the 2016 American elections.


What many don’t know is that Cambridge Analytica has its origins in another company, SCL Group. It is a British military contractor, and when I first started working there CA did not exist as a structure at all. Our task when I joined was to map out and predict the spread of radical Islamic narratives online and to analyze how recruiters are radicalizing young men and coercing them to do terrible things. We would then build systems and tools to act as early warning signals, so that a military or civil agency could interfere with recruiting and radicalization operations in different parts of the world. It all changed as soon as Steve Bannon sat at the helm of the company. All the technologies that were designed to interfere with the effectiveness and cohesiveness of terrorist organizations got fully inverted. With a few tweaks, they were now used against voters in the American elections – we started looking at ordinary Americans the same way the military was looking at radicals, and the dirty game of disinformation began to unravel.

Initially our algorithms easily identified parts of the American population that were more narcissistic, neurotic and conspiratorial. They were then targeted with messaging that encouraged more conspiratorial and neurotic thinking and lured them into forums, chat rooms and Facebook groups with people who shared the same thinking – or oftentimes bots that were parroting the same narratives. Once these groups grew to include a couple of thousand members, local events would be set up. At that point, even if only 5 percent of users actually showed up to those events, that would be enough to form a tangible community where conspiratorial thinking was completely normalized. What started as a digital fantasy had become their reality. The exact same techniques that the military would use to undermine a narcotics or terrorist operation were being used reversely, to essentially create an American insurgency that then became what we now know as the alt-right.

Wylie believes that, but for Cambridge Analytica's brainwashing techniques, the Brexit Leave victory and the US election of Donald J. Trump would not have occurred.


It is absolutely reasonable to make that assertion, especially if we look at how narrow the margins were for Donald Trump and Brexit – both results were within a couple of percentage points. In Brexit we are talking about less than 2 percent of the vote. You see, because elections are a zero-sum game, you essentially only need one more vote to be the absolute winner. Even if Cambridge Analytica only added a margin to the effectiveness of the campaigns – and we know that it actually targeted millions of people – the Trump and Brexit campaigns wouldn’t need much more. I have few doubts that the outcome would have been different if these shady techniques were not used.