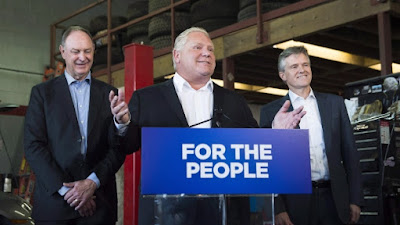 At least there's something Doug Ford can thank his Liberal predecessor for - cutting Ontario's greenhouse gas emissions. He's positively boastful about that, to the point where he's shining an unwanted light on his anti-climate tax comrades, Kenney and Moe.

Doug Ford's government in Ontario is now insisting the province should not be expected to do more than its "fair share" to meet Canada's national commitment to reduce greenhouse gas emissions.
But Ford's definition of "fair" might present a significant challenge to the rest of the country — particularly Ford's conservative allies in Alberta and Saskatchewan.

Under Kathleen Wynne's Liberal government, Ontario was committed to reducing its emissions by 37 per cent below 1990 levels by 2030. While tearing down large portions of that government's climate agenda, Ford's Progressive Conservatives settled on a less-ambitious target: a cut of 30 per cent below 2005 by 2030.

That new provincial target matches the national target. It's also (conveniently enough) within reach already. As the Ford government now loudly notes, Ontario's emissions have declined by 22 per cent below 2005 levels.

"Today's report confirms Ontario has decreased emissions by 22 per cent since 2005, while the rest of Canada's input continues to increase," Rod Phillips, Ontario's environment minister, said last week when the federal government released the latest inventory of Canada's emissions. "Families in Ontario have already paid a significant cost for these efforts, yet the federal government continues to ask us to pay more than our fair share."

But what is the real picture? It's pretty grim. A recent report from the University of Western Ontario's Ivey School of Business shows Canada's greenhouse gas emissions by province, both overall and per capita.

Ford says Ontario has done enough and it's now up to the "rest of Canada" to do their share.

Here are some of the findings from the summary to the Ivey report:

• Canada’s greenhouse gas (GHG) emissions currently represent about 1.6 percent of the global total. Canada is among the top 10 global emitters and one of the largest developed world per capita emitter of GHGs.

• In per capita terms, Saskatchewan and Alberta are among the developed world’s largest emitters at 68 and 67 tonnes respectively.* Per capita emissions in BC, Ontario, and Quebec are in the 10-14 tonne range, comparable to best performers in Western Europe.

• For provinces with announced GHG emission targets, the level of ambition varies widely. Alberta plans to increase emissions towards 2020, and then return to today’s levels by 2030, while Ontario Quebec and Manitoba plan to reduce emissions by 56, 27 and 8 Mt respectively.

• Even if all provincial targets were fully achieved, Canada would still need to reduce GHG emissions by an additional 45 Mt in 2020 and 55 Mt in 2030 to meet its international commitments.

* The Ivey analysis was before the federal government's report this week showing that the Tar Sanders massively understated their GHG emissions from bitumen extraction.

So, since Ontario, Quebec and British Columbia have the lowest, per capital emissions, "comparable the best performers in Western Europe," while Saskatchewan and Alberta, by contrast, are off the chart even using their dodgy numbers, Ford must be referring to his comrades in arms, Kenney and Moe. They're the dirty buggers, the climate wreckers, and they should be easy pickings for Justin Trudeau. Wait, I'm sorry, when it comes to bitumen Trudeau is in their canoe.

No matter how much they shuck and jive, the petro-provinces and the petro-state simply cannot get past this:


According to the latest statistics, Canada emits about 1.6 percent of the world’s GHG emissions.  Despite this relatively low share, Canada is among the top 10 global emitters on an absolute basis, and stands firmly in the top 3 for emissions per capita. By way of comparison, Canada’s population makes up about 0.5 percent of the world total so that our emissions’ share is about 3 times our population share.

Trudeau acolytes at this point tend to drag out SFU economist Mark Jaccard's recent comment that, thanks to the Dauphin, Canada is the climate change envy of the world. It's not. We are among the top 10 overall global emitters even though we're just half a per cent of the world by population and, yes, we are "firmly in the top 3 for emissions per capita." That might make us the envy of Saudi Arabia or Venezuela but the rest of the world, really?


The reason we're in the mess we are today is the same reason our grandkids have already been consigned to an even worse state when they're our age is the succession of politicians who have and keep kicking this can down the road.

Trudeau was on twitter today blathering on about how you can't have a healthy economy without a healthy environment. Tomorrow, in the tradition of Janus, he'll probably try to make the case for flooding world markets with bitumen. What a dark farce.