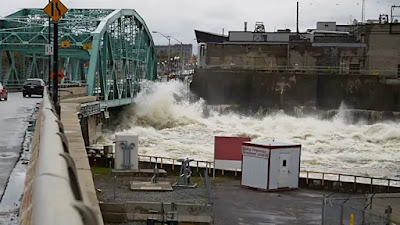 Right out of the gate, Justin Trudeau is balking at serious action on climate change.

Speaking on Sunday night, Justin Trudeau, the prime minister, suggested that using federal money to help relocate communities affected by flooding was a possibility. “Once we secure the situation through this spring flooding season, we will have to have significant reflections and conversations on how we move forward,” he said, according to the Canadian Press. 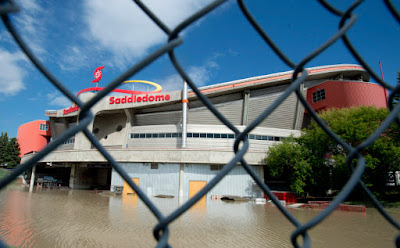 Jesus, that's the same crap we heard after the last devastating Calgary floods in 2013, the area's second "once in a century" flood in eight years. First there was the "no one could have known" dollop of horse shit, quickly followed by the "we're going to get on top of this just as soon as we get this mess sorted out."

Politicians are liars and that includes the current boss. The more pressure they face the harder they lie. They also know how to use their "get out of jail free" card. It's called "creeping normalcy." Give the people a little time and they'll simply accept their "new normal" and complacently go about their business. It's what we do. It's part of human nature. It lets them sell us down the river.


Alberta's Tory government, as we now know, commissioned a flood mitigation study in 2006, right after the First Great Flood, and then sat on it until last year, just in time for the Second Great Flood. The report identified flood plain risks and recommended a ban on development there. "What? No development? Are you out of your frackin' mind? This is ALBERTA for f--k sakes. Ditch that report."

Well that 2006 study is probably useless now anyway. It was based on the 2005 flooding, back when they thought that really was a once-a-century event. By some estimates the 2013 floods could be three times worse and so "flood plain" has taken on a much larger dimension. And that once-a-century business is now pretty much debunked.

Will the Alberta government do a new flood mitigation study? That would involve thinking the unthinkable, the great conundrum that climate change forces on us. How do we persuade people to prepare for things far outside of our experience? Today's political classes don't work that way. They don't have the political vision or the moral courage.

You see the soggy people of Alberta never menaced the Tories. They never threatened the conservatives' hold on power. They signaled they would settle for whatever they were given and, when the cost of remedial measures was figured out, they weren't going to be getting much.

Trudeau is going to emulate the Tories in Alberta. Why? Because this grave threat is way above his pay grade. He's not smart enough. He's not courageous enough. His credibility is in tatters. He's not even popular enough to implement what, to many, would be unpopular measures. No, it'll be "significant reflections and conversations" from this prime minister, words and hollow words at that, not deeds.

Sorry, Canada, but until you're ready to put the fear of God into these political hustlers you're on your own.

So True, so True.! There isn't anything else to add. It is sad, sad, sad. Anyong

The hard lesson is that Trudeau and many, if not all, of his caucus do not work for us, do not represent us. Their allegiance is to banks, powerful corporations and their wealthy friends/supporters. The rest of us simply don't matter. Elitism writ large.