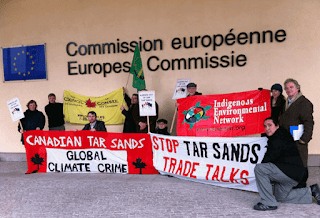 Bear with me while I vent a little - no, a lot.

1. - Remember that climate change is the first existential threat that human civilization, Canada included, has faced. It is of an order of magnitude more threatening than any war in history.

2. - Realize this is a "whole of government" size problem. We need to harness the entire power and resources of our governments, federal and provincial, to this effort.

3. - Measure the magnitude of the danger, and the resources available to respond to it against what these governments are actually doing which is not very much.

I was relieved to see their own commissioner's report recognize that it is "effectively irreversible" but, as I've been writing for a number of years, what we do now will determine how much worse, even deadlier it will be for our young and future generations.

We do have the fate of the future in our hands, just as Greta Thunberg and her school climate strikers remind us, and promoting the extraction and export of highly toxic, high-carbon fossil fuels, precisely when we need to be going just as fast as we can in the opposite direction, is monstrous.

There are monsters among us.

Bold as it is to say this, what they're doing represent crimes against humanity and yet almost none of us can get our heads around that. We're Canadians, citizens of the world sans pareil. Canadians are nice. Canadians are caring, generous, compassionate. Canadians aren't the kind to line their pockets at the expense of the lives of little brown people from poor and vulnerable countries in distant lands. To all of that - "bollocks."

There are several papers on accelerating climate change as a crime against humanity. This one, at Jacobin Magazine, summarizes the case without resorting to frustrating legalese.

There is no excuse any more for pretending we don't know what that stench is pouring from those chimneys. We know full well.
Posted by The Mound of Sound at 11:54 AM

'this is a "whole of government" size problem. We need to harness the entire power and resources of our governments, federal and provincial, to this effort.'
Exactly Mound, so whilst our current federal 'leader' has sabotaged the movement to cleaner fuels with his support of the dirty 'oil' to the coast he is far from the worst 'leader' ignoring the problem. Ford and his kill carbon tax supporters, Notley 'gota build new pipeline' etc etc, even myself who agrees with much of what you say but feel helpless to do ANYTHING about it. We are all equally at fault .... except perhaps those school kids who are getting vocal about protecting their future.

For Canada, the Liberals are still Canada's bet bet on Climate, despite their failings, thus far. Their heart is in the right place; their failings may well be accounted for:

1. Ever since they were elected the Liberals have been dragging a reluctant electorate, kicking and screaming, against any progress on the Lib Climate agenda, as evidenced by the people's choice of their provincial premiers/positions in the interim.
Only look to the provinces to see who backed out; who's anti-progressive.
Canada is not a dictatorship. The carbon tax was a good start and part of the Liberal election platform.

2. The NDP and the Greens have aligned themselves with the Cons at every instance, which indicates they're not progressives really, but just want to bring down the Liberals and get ahead at any cost. The only real way to get the progressive climate agenda fulfilled would be to align with the Liberals as they used to do on so many progressive issues.

3. The Liberal gov't traded one pipeline for another to keep the tremulous pearl-clutching business community and middle class populous on board.

4. With the latest news on climate, moving the population along should be a lot easier, leaders like Scott More, Doug Ford, and Andrew Scheer notwithstanding.


I don't believe that we're all "equally at fault" on this, Rural. There may be no saints but there are several degrees of sinners. As you write, you feel powerless. That is because we are largely powerless beyond a trip to the ballot box every four years or so.

We get a guy who says he's different, claims he'll take real action on climate change and then buys an overpriced pipeline with $4.5 billion of our money and another 7 billion to follow. Reminds me of Lightfoot's song, "That's what you get for lovin' me."

The petro-barons of the Calgary Petroleum Club would be nowhere without political enablers like our prime minister. He's supposed to be on our side and the side of our kids, our grandkids and generations beyond. He's not. He has sold out the public interest to political expedience and narrow private interest and he's done that repeatedly. And he's been much more successful at it than his predecessor.


Brawnfire, I can't buy your arguments.

"No country would find 174 billion barrels of oil in the ground and just leave them there," boasted your guy to a gathering of oil execs in Texas. That's not a guy dragging a reluctant electorate to the altar of climate change action.

When Trudeau's cabinet was sworn in each minister received a mandate letter that were posted online. Each minister was charged with a dual mandate - whatever their ministry did and promotion of the economy. Dame Cathy later went on record that she was an environment minister and an economic minister and used that to say that climate action could not be allowed to impact the economy.

When Trans Mountain was derailed by the courts, Trudeau set out to fast track a review of the project. Senior officials from relevant ministries were charged to evaluate it and submit reports. Then, as the deadline for those reports drew near, an envoy from the prime minister gathered those officials in one room and directed that their findings had to support the pipeline. All the details are on the National Observer web site.

That's the prime minister you contend is our best hope on climate change? I'm not insane as I would have to be to accept your argument.

The Greens have not aligned themselves with the Tories, that's pure bullshit. They may all be critical of the Dauphin but that doesn't mean they conspire or even speak with one voice.

Don't remind me of the past - when, for 40 years I was a faithful Liberal supporter. The party of Wilfred Laurier, Louis St. Laurent, Mike Pearson and Pierre Trudeau that did so much to build Canada is gone. It mutated into something else entirely, especially during the Ignatieff years and ever since.

Progressive - are you kidding? Do you even understand the meaning of the word and the principles of progressivism? Just being somewhat left of the Tories doesn't make you progressive.

Justin Trudeau talks a good game but all the broken promises and the trail of lies that stretches from the tar pits of Athabasca to the tanker docks in Burnaby show that it's empty talk, cheap rhetoric.

JT would never have been elected had he not introduced a climate agenda compatible with and tied to what's good for the Canadian economy. Surely, you've been around politics in the real world long enough to know that? He never promised anything other than that and that's why he won a majority government.

Oh, I'm progressive alright. But I'm not ready for a pitchfork overthrow to get us where we're inevitably going.

Brawnfire, I've just put up a post on Michael Harris' latest column in The Tyee. He dismantles any notion that Trudeau is anything but a corporatist at heart. Trudeau is a neoliberal - lock, stock and two smoking barrels - and that is antithetical to progressivism.

I can help you out there. You should read Charles Horne's masterful book from 1905, "The Meaning of Modern Life." Start there and work your way up and, eventually, you'll have some grasp of what it means to be progressive.

I know it is not what you intend, but I'll thank you not to patronize me.
I've probably been voting longer than you have and at least as long. I'm a political junkie so I don't need to be better informed.
Looks like I've been a Liberal longer than you have--I can tally more than 40 years.

Brawnfire, your comments inspired me to write a new post, "If Russian bombers were coming over the North Pole."

The idea that Justin's hands were tied reminds me of a moment in the Frost/Nixon interviews, perhaps the very best one. Nixon discusses the essence of political leadership that he describes as a leader's ability to persuade the public to accept necessary but deeply unpopular measures. I found it astounding, given the source, but there's so much truth to it.

Here we are, facing destructive changes that the government's own climate commissioner, describes as essentially irreversible and where do we find a political leader even attempting to persuade the public to accept necessary but deeply unpopular measures in response so that we may have a bearable future for our young people, our grandkids? Your party's leader would instead double down on climate wrecking pipelines to flood world markets with high-carbon bitumen.

Waiting until the public is screaming for action is futile. It will be far too late by then. Trudeau's approach is gross dereliction of his responsibilities to the country and the Canadian public. No amount of apologia will absolve him for that.

And I repeat that neoliberalism is antithetical to progressivism. The progressive order operates in service to the public interest. Neoliberalism shares power with the corporate sector, private interests. Justin Trudeau, as chronicled by Michael Harris, is very much of the neoliberal school.