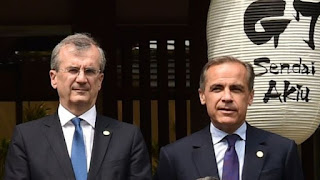 Canadian Mark Carney, governor of the Bank of England, has joined with Villeroy de Galhau, his counterpart at the Bank of France, to warn the financial community that they can no longer afford to ignore the potentially catastrophic consequences of climate change.


They said: “As financial policymakers and prudential supervisors we cannot ignore the obvious physical risks before our eyes. Climate change is a global problem, which requires global solutions, in which the whole financial sector has a central role to play.”

The warning comes as concern over the impact of climate change and the lack of urgent action is increasing, reflected in the Extinction Rebellion protests and schoolchildren’s strikes across the world.

The heads of two of the world’s most influential central banks urged other financial regulators around the world to carry out climate change stress tests to spot any risks in the system, while also calling for more collaboration between nations on the issue. They warned that a “massive reallocation of capital” was necessary to prevent global warming above the 2°C maximum target set by the Paris climate agreement, with the banking system required to play a pivotal role.

Wait, there's an idea.  Like roadside breathalyzers, what if we had climate change stress tests for our governments - federal, provincial and municipal? If you think the financial institution scores would be shockingly low, they'd be nothing compared to our political institutions who, although directly responsible for confronting this existential threat pretend to ignore reality for the sake of political expediency. Party over country. Looming elections over the hope of some viable future.

It's like a psychotic Kabuke theatre to watch Ottawa and the "aggrieved" provinces duke it out over a minuscule and grossly ineffective carbon tax. They're not as ignorant as they pretend. They don't care about the future and that means they don't care about us.

Let's see a stress test. Here's an example: In the 2007-2008 Great Recession, the American government had just enough financial resources to staunch the artery before the economy bled out. If it happens today, that critical buffer is gone in the name of "tax reform." This is one of those things that Keven Phillips, patrician Republican insider and author of the 2005 book, "American Theocracy," discusses as one harbinger of the irreversible decline of one global hegemon and the ascendancy of another.

The long and the short of it - any government today that can't pass a political stress test is merely setting us up for a hard, and possibly unsurvivable landing.  Corporations have as much need to survive as we do. Governments, they're not the same.

It's about time we kept scorecards on our political parties and leaders that measured performance against known, understood, and computated threats. I'm not even guessing on this one. They would fail miserably, intolerably.

Our future, the lives of our youngest and generations to follow them, can no longer be entrusted to Trudeau (the compliant) or Scheer (the utterly malevolent). By failing to exploit the ecological advantages that come from such a huge and temperate land with no excess population, they're wilfully leaving us exposed and endangered. That, in my opinion, crosses the line into dereliction.

To me, it's a very ugly pox on both their houses. Trudeau, after seeing Canadians endure Harper, even a Harper false majority, held out hope by promising electoral reform. Then he won his own false majority and, quelle surprise, changed his mind. That was an act of self-interest and an even greater act of betrayal. That rendered the Liberals unfit to govern even if the alternative was worse.

Liberals are already squirming, writing posts that a vote for anyone other than Justin is a vote for Trudeau. Sorry, guys, it didn't have to be that way. Electoral reform would have sorted it all. Now it may cost Trudeau a workable minority government and hand Scheer the reins of power.

Electoral reform would have another critical benefit to Canada and our people. It would give the Green Party a louder and more effective voice in Parliament. Face it, we're trailing in the bottom of the 9th.  Somebody has to speak for the future.
Posted by The Mound of Sound at 11:52 PM