The Guardian - It's Time to Break the Machine 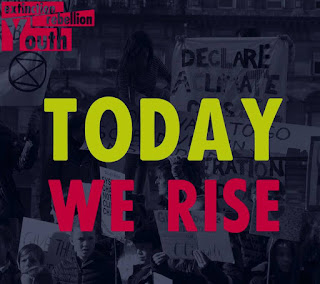 Is revolt in your future? Perhaps, if you want a future for your children and grandchildren and all the young people of their generations.

The editorial board of The Guardian says disrupting traffic isn't enough. We must derail a system, economic and political, that has us on a path to climate catastrophe.

The idea that we can change the whole basis of our planetary economy without pain and inconvenience for the global middle classes is simply false. The enormous political challenge is to ensure that the pain of adjustment towards a carbon-neutral economy is fairly distributed. At the moment the pain is concentrated on those least able to bear it. This is true between countries, in as much as it is sub-Saharan Africa where the destabilising effects of climate change are most visible and painful. It is also true within the rich countries which consume more than they sustainably can. In the west it is the poor who will be hit worst by rising prices for food and fuel. Yet a future of less consumption and less convenience is inevitable. We can choose to some extent how and when to face it, but it cannot be indefinitely postponed.

The purpose of climate activism is to make that choice consciously and deliberately, with planning and forethought, rather than have it forced upon us in a series of improvisations between catastrophes. The activists of Extinction Rebellion use the metaphor of war, and this is not entirely exaggerated. Although one of the purposes of groups like Extinction Rebellion is to avert wars over resources, this may – paradoxically – require the kind of social and political mobilisation only otherwise seen in wartime. The sense of a common purpose, and of suffering borne in common, which has so often and so fraudulently been invoked in the rhetoric of the political right since the financial crisis must now be appropriated and given real meaning.

Yet it is not enough for climate change to remain solely a cause of the left. This is a cause that must ultimately transcend left-right distinctions. To achieve such an escape from traditional politics will not be easy. It will be fiercely resisted, because there are many powerful forces that benefit, in the short term, from smugness and inaction. But the movement needs to isolate and expose them.

It's obscene, given the perilous state of the global climate, that Canada's government would pursue the rapid expansion of high-carbon/high-cost/low-value fossil fuels such as bitumen. That is the path of our mainstream political parties. That is the course of Justin Trudeau. It is the same course of Andrew Scheer and the Conservatives.

Trudeau, Scheer and their eventual successors won't stop this. You will have to stop them. That means civil disobedience, disruptive civil disobedience. Yes, they will harness the power of the state to suppress this resistance but they can't be allowed to succeed. They need to be broken before they can break us.

I'm reading to fight from my wheel chair if I must. Anyong

You first. When you're holed up in the Supermax cell next to Julian Assange, I'll try to write.

1. The humanity's zest for greed and the urge to pass our genes into other generations can only be stopped by... a catastrophe.
"The sense of a common purpose" can only materialize under extreme pressure.
2. From each according to his ability, to each according to his needs" mantra was tried by the numerous communist governments with utter failure.
3. "The idea that we can change the whole basis of our planetary economy without pain and inconvenience for the global middle classes is simply false."
Even more false would be a statement that oligarchs will voluntarily make themselves into the "middle class."


If we have achieved oligarchy, Anon, the sooner we reveal it the better. Let's see who the people we empower to represent and govern us really serve. There are a lot of self-styled 'progressives' who live in delusion on that score.


Karl, it's your cynicism that always gives away your insincerity.