That Horse, It's Dead. Leave It Alone. 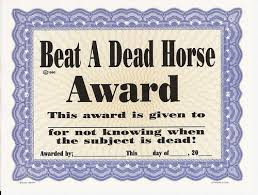 The SNC-Lavalin business has jumped the shark. That's not to say it's over or that there may not be new revelations but, until something seismic comes out - if ever, it's a dead horse. We've had our fill. Enough.

I think most of us have some opinion of who, if not both, is blameworthy. Some are backing Justin, others stand with Jody and Jane. Me, a pox on all their houses. There are vastly more important issues we need to address and we simply can't let this keep consuming all the air in the room. Ask Jeremy Corbyn or Theresa May what awaits once you start down this road.

There is no shortage of issues confronting the world, our nation, our provinces and our communities. We have elections looming, our once in every four years chance to almost be heard. On some issues the parties are virtually indistinct. On others they're miles apart. We can intuit where they're going on some issues while others are wild cards.

One thing that will help no one is to allow this to become Andrew Scheer's election cudgel. That certainly won't help the country and yet Chuckles would never let that stand in his way.

I think Jody and Jane should get themselves squared away with their riding associations and consider running as independents if they want to remain in federal politics. What could be better validation of their "principled stands" than to run and win their ridings?

So let the electioneering proceed and let's put this Justin/Jody/Jane business on the shelf, see how it ages. If, without constant stoking, it fades to black then we'll know that it was always less than once claimed.
Posted by The Mound of Sound at 9:39 AM

" Me, a pox on all their houses."
With you on that one Mound!

The cartoons became so annoying that I forgot all about the feature presentation. I’m going to find the sleepiest looking guy in the theatre and ask him if he remembers anything.

What could be better validation of their "principled stands" than to run and split the vote their ridings?

.. true enough Mound, true enough..
I've maintained all along - the Lavalin imbroglio is about a CONUNDRUM .. to wit - Lavalin is embedded, enmeshed with governments & at shocking levels - both Federally and Provincially.. Even mainstream media & so called 'journalists' are ignorant of the scope of this.. as am I. The average Canadian citizen, blogger, pundit, commenter is unaware of this tip of the iceberg phenomena (90% is hidden from us) I am waiting for the charges to be dropped in the upcoming Ex Commander Norman Criminal Trial.. lest more of the decision making by the very same Trudeau inner circle folks, plus former senior Minister Scott Brison are dragged back into the limelight.. by one Ms Henein - Defence Lawyer

Oh.. deary me.. Does it matter he suddenly sorrowfully resigned - to spend more time with his family.. but came upon a great senior opportunity with BMO who has a big stake in the Trans Mountain pipeline Trudeau bought for all of us .. darn it, there's Lavalin too! And wasn't that Scott Brison cutting the cheques ordered up by Trudeau/Butts. So all popping up in that CONUNDRUM .. getting Alberta Dilbit to Burnaby BC for export to un-named Asian buyers.. who are never named.. in the Great Ethical Oil To ASIA fandangle

It aint over till its over.. Rover.. (adapted from Yogi Berra.. with great glee !)

Hello Everybody,
My name is Mrs Sharon Sim. I live in Singapore and i am a happy woman today? and i told my self that any lender that rescue my family from our poor situation, i will refer any person that is looking for loan to him, he gave me happiness to me and my family, i was in need of a loan of $250,000.00 to start my life all over as i am a single mother with 3 kids I met this honest and GOD fearing man loan lender that help me with a loan of $250,000.00 SG. Dollar, he is a GOD fearing man, if you are in need of loan and you will pay back the loan please contact him tell him that is Mrs Sharon, that refer you to him. contact Dr Purva Pius, call/whats-App Contact Number +918929509036 via email:(urgentloan22@gmail.com) Thank you.

2019 FUNDS/FORGET ABOUT GETTING A LOAN

GET YOUR BLANK ATM CREDIT CARD AT AFFORDABLE PRICE
*We sell this cards to all our customers and interested buyers worldwide,the card has a daily withdrawal limit of $5000 and up to $50,000 spending limit in stores and unlimited on POS.*

*email blankatm002@gmail.com
*you can also call or whatsapp us Contact us today for more enlightenment
+1(301) 329-5298
*BEWARE OF SCAMMERS AND FAKE HACKERS IMPERSONATING US BUT THEY ARE NOT FROM
US CONTACT US ONLY VIA THIS CONTACT *
WE ARE REAL AND LEGIT...........2019 FUNDS/FORGET ABOUT GETTING A LOAN....