The UFO Controversy is Back, Thanks To the US Navy 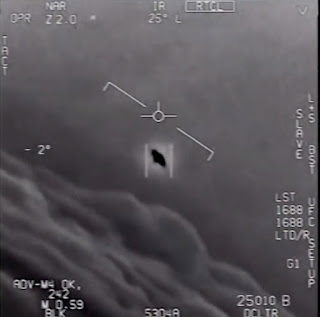 After decades of denial, even the American government now admits that there is something, a lot of somethings, operating in its airspace that it simply cannot explain. They're tracking and logging intrusions by some sort of aerial vehicles that the cannot identify, craft that seem to defy conventional aeronautics.  Little green men? Nobody knows.

As first reported by POLITICO, these intrusions have been happening on a regular basis since 2014. Recently, unidentified aircraft have entered military-designated airspace as often as multiple times per month, Joseph Gradisher, spokesman for office of the deputy chief of naval operations for information warfare, told The Washington Post on Wednesday.

Citing safety and security concerns, Gradisher vowed to “investigate each and every report.”

He said, “We want to get to the bottom of this. We need to determine who’s doing it, where it’s coming from and what their intent is. We need to try to find ways to prevent it from happening again.”

Luis Elizondo, a former senior intelligence officer, told The Post that the new Navy guidelines formalized the reporting process, facilitating data-driven analysis while removing the stigma from talking about UFOs, calling it “the single greatest decision the Navy has made in decades.”

Chris Mellon, a former deputy assistant secretary of defense for intelligence and staffer on the Senate Intelligence Committee, was less laudatory.

“I don’t believe in safety through ignorance,” he said, scolding the intelligence community for a lack of “curiosity and courage” and a “failure to react” to a strong pattern of sightings.

In some cases, pilots — many of whom are engineers and academy graduates — claimed to observe small spherical objects flying in formation. Others say they’ve seen white, Tic Tac-shaped vehicles. Aside from drones, all engines rely on burning fuel to generate power, but these vehicles all had no air intake, no wind and no exhaust.

Elizondo, who ran the AATIP, [Advanced Aerospace Threat Identification Program], said the newly drafted guidelines were a culmination of many things, most notably that the Navy had enough credible evidence — including eyewitness accounts and corroborating radar information — to “know this is occurring.”

“If I came to you and said, ‘There are these things that can fly over our country with impunity, defying the laws of physics, and within moments could deploy a nuclear device at will,’ that would be a matter of national security,” Elizondo said.

With the number of U.S. military personnel in the Air Force and Navy who described the same observations, the noise level could not be ignored.

“This type of activity is very alarming,” Elizondo said, “and people are recognizing there are things in our aerospace that lie beyond our understanding.”

Could it be that there are no comments until this one is that ridicule follows those that think it probable that there is life beyond our own earth?
Have those that believe that the earth is only 6000 years old and nothing else exists muted all responses?

In this huge universe , if the planet earth and its inhabitants is as good as it gets then we re truly screwed.


I heard about this a few years ago but I figured it was all National Enquirer sensationalist bunk. These days anyone can throw together a seemingly convincing line. Then I read it in Politico and the Washington Post with attribution to a serving Pentagon official.

For years the Americans feared a real life "War of the Worlds" that might send the people in a panic. It's remarkable that hasn't happened.

The technology described in pilot reports and from ground sensing stations is remarkable. Anyone who has pulled 6 Gs has a good understanding of the human body's limited tolerance of aerobatics. The forces involved in the acceleration attributed to these unidentified vehicles would kill any human being.

A missile accelerates rapidly but it has a rocket motor and exhaust. Even something like a Sidewinder needs fins for maneuvering. These seem to have neither exhaust nor control surfaces.

I'm pleased this is coming out in the open, pleased but also worried. With that lunatic in the White House what if this is American technology? That should scare us all.

Whatever it is, it cannot be ignored .

Ignoring and sticking our heads in the sand is not an option ; on many issues.


But, Trailblazer, we do it so well.