So, When Does SNC-Lavalin Stand Trial? 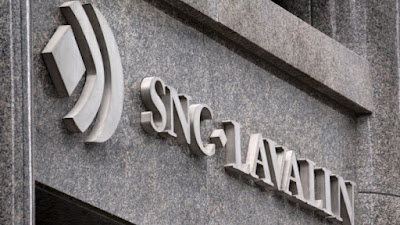 Can you imagine if Cap'n "Cash for Access," protector of every tax cheat in the KPMG/Isle of Man scheme, "Damn the climate, full speed ahead" pipeline builder and SNC-Lavalin benefactor got his new, and presumably much more compliant, A.G., Dave Lametti, to give the defendant a DPA parachute? Seriously, can you imagine?

I can't. But I've been wrong before. Besides it would be a pity, after he's again sullied the Liberal brand, if he didn't get something out of it.

I suppose they could turn the courtroom into a Kabuki theatre and have the prosecution throw the fight. Screw it up so bad that SNC-L walks. That might work. Then again, it's SNC-Lavalin.

Then there's SNC-L's ace in the hole - an "unreasonable delay" dismissal of the charges. It's worked before, as recently as February, when charges were dismissed against SNC vice-president, Stephane Roy.

The preliminary hearing wrapped up Monday and now we wait for the judge's decision on whether there's enough evidence to send the case to trial.

Weren't a bunch of charges against other executives thrown out because the wiretaps were , like Jody's , unethical. I love irony.

If this is the evidence the prosecution goes forward with, we may be spared the expense of a trial and the embarassment of an loss.


That would take your boy Justin off the hook, wouldn't it Rumley? And the only SNC exec I know who escaped the noose was on a "delay of game" penalty.


You say Jody's taping was unethical. How does that tie in with the irregularities in the warrants the RCMP used to form its case against SNC-L execs? The evidence the cops had thrown out as inadmissible wasn't because it was unethical, it was procedurally flawed. Nice try to conflate two entirely different issues.

Mound: I can see trudeau and his corporate elite advisors advising his new Attorney General to try to get the DPA for SNC Lavalin. These are not very bright people. I can hear them telling Trudeau. "Look by election time Canadians won't even remember" Or they may wait, if that's possible, to see if they win the election, preferably with a majority, then do it. Trudeau constantly lies to the Canadian people, which tells me that they think Canadians can be manipulated to believe his lies. They underestimate Canadians all the time and at every turn and at the same time overestimate the power they have to influence Canadians.

You seem to miss the irony ( no Alanis you ). Stupid telephone recordings bit both JWR and the SNCL prosecutors in the ass. Hubris indeed


Show me the teeth marks, Rumley. Bit her in the ass? You really think that?
The ox that's gored is Trudeau's. He threw everyone he could think of under the Liberal bus. It didn't work.