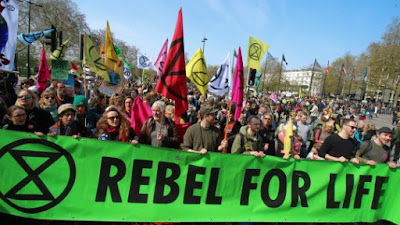 Despite a White House and Congress chock full of climate change deniers, the US Environmental Protection Agency has issued a stark warning to American municipalities. Get ready. Get ready now. It's here and what's coming is going to be worse.

The Environmental Protection Agency published a 150-page document this past week with a straightforward message for coping with the fallout from natural disasters across the country: Start planning for the fact that climate change is going to make these catastrophes worse.

The language, included in guidance on how to address the debris left in the wake of floods, hurricanes and wildfires, is at odds with the rhetoric of the EPA’s own leader, Andrew Wheeler. Just last month, Wheeler said in an interview with CBS that “most of the threats from climate change are 50 to 75 years out.”

Multiple recent studies have identified how climate change is already affecting the United States and the globe. In the western United States, for example, regional temperatures have increased by almost 2 degrees Fahrenheit since the 1970s, and snowmelt is occurring a month earlier in areas, extending the fire season by three months and quintupling the number of large fires. Another scientific paper, co-authored by EPA researchers, found that unless the United States slashes carbon emissions, climate change will probably cost the United States hundreds of billions of dollars annually by 2100.

...“This EPA guidance is clearly telling the public you need to start dealing now with disasters that are being made worse by climate change and will be made even worse due to climate change,” said Amit Narang, regulatory policy advocate at the group Public Citizen. “It’s pretty troubling to me to see the head of EPA saying the exact opposite thing.”

To some extent, the new document reflects the advances scientists have made attributing extreme events to climate change since a landmark analysis was published in 2004 looking at a deadly European heat wave the year before.

Of course the American government, like Canada's is deeply in the embrace of the fossil energy giants, a massive and potentially deadly conflict of interest. On one side is money, sort of. On the other side is life. You can't have both. When they pretend otherwise, they're lying.

The EPA document focuses on debris from severe climate change impacts and "debris streams" as well as how communities should deal with them. It's pretty damn dystopian. Topics such as what to do with all that asbestos when those old buildings collapse, that sort of thing.
Posted by The Mound of Sound at 10:44 AM