Have We Lost the Ability to Govern Ourselves? 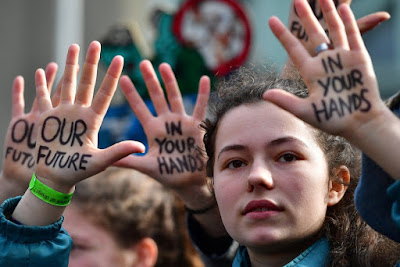 It was October, 1980, and US elections were just a few days away. Ronald Reagan took to the airwaves and asked Americans "Are you better off than you were four years ago?"

Reagan was talking about how voters were doing materially. Were they able to get a job? Could they afford the rent? A new car or a family vacation? That sort of thing.

It was a one-two punch followed up by Reagan's "It's morning in America" and he rode it to sweep the high-minded Jimmy Carter straight out of the White House.  Over the following eight years, Ronald Reagan transformed the United States from the world's largest creditor nation in 1980 into the world's largest debtor nation by the time George H.W. Bush took over and America became a fiscal hot mess ever since.

The ghost of Ronnie is with us still. The neoliberal order ushered in by Thatcher, Reagan and Mulroney, still has us by the throat. Politicians strive to swell their nation's GDP as one of the most powerful demonstrations of their fitness to serve. "It's the economy, stupid."

In 1980, global GDP was $11.17 trillion USD. In 2016 it hit $75.87. By 2018 it had swelled to $87.51 trillion USD. So there's been about an eightfold increase in economic activity from 1980 to 2018. That means a roughly commensurate, eightfold increase in resource extraction, and in production, and in consumption and about the same in waste. That's pretty impressive and it should also be just a bit worrisome.

If you're a statistics freak and interested in other indicia, there's plenty more here in a post exploring The Great Acceleration.

Looking only at GDP and population growth from 1980 to 2018, we've grown GDP about eightfold and while we've almost doubled in population. All of that since Reagan proclaimed "morning in America."

Is the growth metric even relevant any longer? When growth reaches levels seen in nature only in malignancy and pest infestations, shouldn't we revisit the question?

I'm asking this question because of what I keep hearing from some very well-intentioned, thoughtful Liberals when the subject turns to rapidly decarbonizing our economy and shutting down the petro-state. The response invariably turns to how that would "hurt the economy" and see their party punished at the polls.

They're right on the first part. It would cause some economic contraction. How much we don't know. How much it would stimulate growth in other areas such as renewable energy we don't know.  We do know how that would benefit our future over the next twenty years and our grandkids future over the balance of the century. The point is, it's not a net loss proposition.

As for a price to be paid at the polls, how much of that is because governments fail to have a realistic conversation with us about what's at stake, the trade-offs, and our collective responsibility to the future?

Then there's the standard argument about why should Canada act unless every other nation agrees. Isn't that a vague corollary to when your kids say, "but, mom, all the other kids are..." to which mom replies, "if all the other kids were jumping off a bridge does that mean you should also?"

The fact is we've just under 12 years remaining for the nations of the world to slash greenhouse gas emissions by half if we're to have a reasonable chance of averting runaway global warming - truly catastrophic climate change.

Canada is a major emitter of greenhouse gas. Our GHG footprint puts us in the first tier along with Russia and China. Second tier emitters such as the US and Australia aren't far behind.  If the major emitters, the real carbon hogs, won't lead what do we expect of the other countries?  We're the cork in the bottle. Given what inaction portends and we know that so well, what legitimate excuse do we have for dicking around with gestural responses, i.e. carbon taxes?

China, Russia and Canada’s current climate policies would drive the world above a catastrophic 5C of warming by the end of the century, according to a study that ranks the climate goals of different countries.

The US and Australia are only slightly behind with both pushing the global temperature rise dangerously over 4C above pre-industrial levels says the paper, while even the EU, which is usually seen as a climate leader, is on course to more than double the 1.5C that scientists say is a moderately safe level of heating.

What we're doing isn't just wrong, it's not survivable. That's the true measure of this emergency and, as our government's climate commissioner recently made clear, it is an emergency. Tell me, do you see any sign of our major political parties acting as though we're in an imminent emergency?

What are we to make of this self-serving inaction, ducking the question, kicking the threat down the road? We have had thoroughly-researched scientific studies up the yin-yang, clarion call warnings, about where the path we're on leads. It leads to our possible, some say probable, extinction.

Is that how we are being governed? Astounding as it is, the answer is a resounding "yes." Only from the darkest recesses of our mind where the bedrock of denialism is found can we possibly argue "no."

Now I'm not picking on Justin although he is pretty bloody awful. He's not worth having but he's a damn sight better than this crowd: 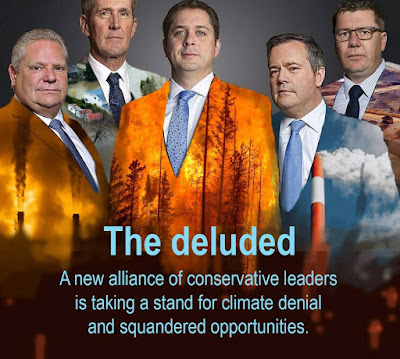 If Trudeau is the best we can do and we make our plight considerably worse by electing climate clowns like the Rogue's Gallery depicted above, we're in trouble - deep, deep trouble - and it'll be even worse for our children and theirs.

None of them has a vision of governance we so desperately need at this very moment to begin preparing for what is coming. None of them, and that includes the prime minister.

I apologize for the rambling, 'stream of consciousness' nature of this post. Some of the links are from earlier posts, others are from web sites that I search while I'm writing this. I'm lousy at editing and even proof-reading. It's hard enough for me to fashion some sort of ending and hit "post."  That said, for what you're paying for it, you're getting your money's worth.

I don't write this with any expectation that it will change anything. I don't have any pipe dreams. Several years ago I joined the Dark Mountain collective, a refuge for writers, poets and artists, veteran environmental activists, who "are walking away from the stories that our societies like to tell themselves, the stories that prevent us seeing clearly the extent of the ecological, social and cultural unravelling that is now underway."

Dark Mountain isn't about giving up as some, such as Naomi Klein, have claimed. It's very much about continuing to fight the good fight, as I'm trying to do with these posts, but doing that without the burden of false hope that anything is going to change.  It's that false hope that so many cling to ("oh, they'll think of something") that prevents us from "seeing clearly the extent of the ecological, social and cultural unravelling that is now underway."

For what it’s worth, here’s my stream of consciousness. I’ll try to delay my standard assignment of culpability to the libertarians, which has always been my method of giving up.

If you’re going to ask someone to make some sacrifice to the purpose of achieving some common good, then you’ve got to offer them in return a recompense they can understand. By now I’ve come to believe that the survival of our grandchildren may be beyond our ability to understand as of benefit to ourselves. Why would we take even one step beyond when the libertarians have provided us with such a comforting set of easy answers? Oops!


Well, John, if you're right and we have become a society that cannot see the survival of our young as an adequate benefit to ourselves, we're done. It troubles me that we're making decision, more aptly avoiding making decisions, that will have consequences we won't be able to undo. If that's true what are your options - resigned acceptance, fighting on, something else? I don't know.

On the bright side, Kristen Neilson’s quit fired.

So, Kelly’s Girlfriend, Kristen the She Wolf, was more than willing to build the American Concentration Camps, Rape Camps, Child Trafficing sites, and fill them,

But decided building and running the gas chambers and crematorium’s a bridge too far?

That’s what occurred to me after seeing so many otherwise rational people so receptive to the contrived and irrational explanations, dissembling and dismissals offered by the denialist industry. We know the character of what we’re being told, that we’re being jacked around by advertising hacks and academic prostitutes; but it’s not sufficiently important to us that we’ll question those explanations when we know that we should. We even seek out more of them when something like the IPCC report threatens to villainize our complacency.

Ive finally reached an age and state of mind that I can accept the inevitability of my death in the next few years if not sooner.

The fact that all of humanity could be wiped out in what in reality is a short while after my death, somehow fits the self centred approach I've taken to life.