If Russian Bombers Were Coming Over the North Pole 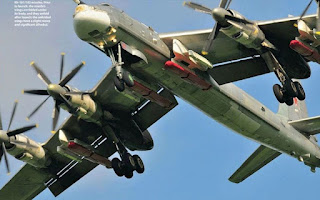 If Canada was under attack from a foreign power would we say, "oh, we must deal with that but in a way that doesn't impact the economy"? I ask that because it's akin to the excuse I get from Liberals about the Trudeau government's grossly irresponsible actions on climate change.

Now, in fairness, we've fought lots of wars but nothing that was truly existential. The threat posed to human civilization by climate change is, however, entirely existential. We may even be triggering the sixth mass extinction of life on Earth. That utterly eclipses any war ever fought. The only equivalent would be a wholesale exchange of Russia's and America's nuclear arsenals, about 12,000 warheads in total. That would rise to the level of a mass extinction event.

Of course no one is going for an all out nuclear exchange because we would all die, including the guy pushing the button.

So, why, when it comes to a truly existential threat that seems to be on the cusp of becoming a reality, do we draw a line at supposedly harming the economy? Just what economy do these people think we'll have if we pull our punches on climate change? This goes from foolish naivete into genuinely nihilistic thinking.

If we are to fight climate change we must be willing, when necessary, to throw off the yoke that economic forces use to thwart our efforts.  The economy must be subordinated to the environment. The environment must not be made to accommodate the inherently harmful ways and instincts of economic forces.

We would not hesitate if it was waves of Russian Bear bombers laden with cruise missiles coming over the pole. Why do we hesitate in the face of a very real, far more menacing threat?

Speaking of the economy, Mound, Heather Scofield has some interesting thoughts:


How many times can we ignore these warnings, Lorne? I have mentioned before how in Latin American studies in undergrad I was shocked at the notion of Andean fatalism. How could those mountain people be so complacent knowing that their survival was in constant peril from villages erased by mudslides, buses careening from treacherous roads into gorges far below and more? We're not intellectually at that point of resigned acceptance, not overtly, yet our conduct and our deep resistance to what's needed to assure our own and younger generations' survival suggest we have embraced nihilism, fatalism.