How Is This Even Possible? Trump Picks a Fox For the Nation's Hen House. 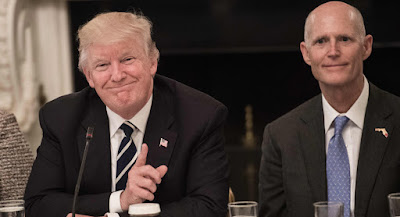 A new chapter in the "Donald J. Trump Book of Malevolence."

Trump has recently turned his attention to health care so who does he choose as his new healthcare czar? You can't make this stuff up. He goes for Rick Scott, the guy behind the largest medicare fraud in his nation's history.

This is the same Rick Scott who, as governor of Florida, absolutely denied the existence of climate change even as the Sunshine State was battered by one massive hurricane after another.


If the Trump administration has a domestic policy doctrine at this point, it could be described as the following practice: the appointment of industry insiders to Cabinet-level positions in order to deregulate or otherwise surgically dismantle the protections of a given department.

In this spirit comes the announcement that Florida Senator Rick Scott intends to deliver on President Trump’s promise that the GOP “will soon be known as the party of health care.” On Thursday, Trump told reporters that Scott, and fellow Republican Senators John Barrasso of Wyoming and Bill Cassidy of Louisiana, will lead the party’s push on health-care reform.

“They are going to come up with something really spectacular,” the president said.

If by spectacular, he means a candidate who was at the helm of a company that pleaded guilty to historic efforts to defraud Medicare, the president has found his man. In the 1990s, Scott was the CEO of Columbia/HCA, a company that, under his direction, owned more than 340 hospitals, 135 surgery centers, and 550 home-health locations by the time Scott resigned in 1997. That year, federal agents announced an investigation into whether or not the company defrauded Medicare and Medicaid on a massive scale. Turns out, they did: According to Politifact’s summary of the settlement Columbia/HCA made with the Justice Department, the company took the following actions while Scott was CEO:

Columbia billed Medicare, Medicaid, and other federal programs for tests that were not necessary or ordered by physicians;

The company attached false diagnosis codes to patient records to increase reimbursement to the hospitals;

Columbia billed the government for home health-care visits for patients who did not qualify to receive them.

In corporation-friendly America, scofflaws walk. No jail time. Just fines. Columbia paid $1.7 billion in fines and other costs and penalties but no one went to jail (sound familiar?).

Scott left the company in disgrace and with oodles of money.  How much? Who knows but it was more than enough to buy him, a medicare scofflaw, a ticket to the Governor's Mansion.


In 2010, Scott spent $75 million of his own fortune to become the governor of Florida; after vowing he wouldn’t do that again, Scott then spent $12.8 million of his family’s money to propel his 2014 reelection campaign. To make it something of an exorbitant tradition, Scott self-financed his 2018 campaign to the tune of $63.6 million.

Hmm, I wonder if Scott and Conrad Black are pals. They were both resident in Florida around the same time only, for part of it, Conrad's abode was a penitentiary cell.

There are among us some who can’t resist the call to public service irrespective of the personal costs. Praise God and may He continue to bless the United States of America with the presence of such patriots.

I realize that my joke isn’t in the same league as the one that Trump is playing on his supporters by making this appointment. Though I believe that he’s aware that most of them don’t know how to read, I’m becoming convinced that he’s seeing how far he can take his act before the last laugh brings the curtain down. If that photo was taken at the announcement, it’s a dead giveaway.

Where has this class of comedy been all my life?

(HOW? They get a percentage! The people foot the bill: so MOAR is MOAR. $1.2T a year down the memory hole – when you compare what Americans spend on healthcare to other countries – as a % of GDP – is one hell of a MOAR!)

People assume Trump is another Bush or Clinton or Obama. Like for instance, all three were in on The Bigger Short. During the 2000s, oligarchs looted the middle class's life savings in home equity with a predatory mortgage scam. (Clinton got the ball rolling deregulating the banks.)

They created a bunch of flaky financial instruments to leverage a housing bubble – they manufactured.

When the music stopped – the market signal the 'gig was up': no bail-out for Lehman Bros – they unloaded and shorted their junk-asset-backed securities and weaseled trillions MOAR from muppet investors and fake governments.

(Then they looted the US Fed treasury of $2T MOAR in fake monetary stimulus: 'Quantitative Easing'. This is why the economy was so miserable under Obama – and why Americans elected Trump!)

IMO, Trump's not into the same game. How do I know? The corporations tell me so!

The corporate media is always behind the oligarchs' mass-market manipulation schemes, fake healthcare reform, war profiteering, etc. If Trump was doing their bidding, they wouldn't be spiking the prole-feed with crystal meth.

Of course, time will tell. (Interesting how these prophets of Trumpian doom were never around to forecast any of the actual economic disasters that came storming down the pike. – And they were in the know!)


I agree with you on one thing, Anon. Time will tell. Have you noticed your boy is becoming increasingly addled? Like a fish flopping on a dock. His dad, did you know, was born in Brooklyn on the Rhine in the heart of the Schwartzwald? Not only that, the doctor delivered him already swaddled in a lovely pair of lederhosen. Must've been rough on his mom. And "orange," the colour of your guy's face, is the new "origin."

It's getting to the point where you can have trouble distinguishing his delusions from his lies. Trump's deck is tightly shuffled. Who do you think is pulling his strings, calling the shots right now? Is Pence running the show?

You know what I'd like to see subpoenaed? Forget the Mueller Report. My pick would be his high school and university transcripts. I want to see that dummy's grades. Then his tax returns, then the Mueller report.

Put those documents all together, get a screen writer, and, voila, a mini-series, "Game of Grifters." Priceless.

A Goldbug and a Pizza Boy to the Fed to destroy the Dollar,

Industry Hacks to the EPA to make pollution great again,

Putting a farmboy who flunked manure 101 in charge of ‘Merica’s nukes,

So much competition for the bottom of the barrel in the White Supremacy House.

How Is This Even Possible?

We see these type of rhetorical questions everywhere and they are running out of steam and becoming counterproductive. They are the sober, serious versions of the Rick-Mercer/SNL comedy routines. There is no path back to the 'golden age' (post WW2 to 1975).

Given the events of the past 20 years, this is entirely predictable.
This is who we are.

I've kinda ignored this story but just found this and I think it reinforces my last comment.
Another symptom (led by 'merca) of 'who we are'.
https://www.theguardian.com/commentisfree/2019/apr/07/boeing-737-max-regulation-corporate-america

"So much competition for the bottom of the barrel in the White Supremacy House."

Trump is also a White supremacist for setting Black prisoners free who were caught up in the Clintons' private-prison-sweatshops: aka, "era of mass incarceration." (See, First Step Act.)

Or, in other words, you don't believe in a return to the progressive New-Deal era.

I would argue there is no future in continuing the neocon/neoliberal downward spiral.

(Ever notice neoliberals and neocons are authoritarian? They make statements that are not based on rational arguments but on an appeal to authority.

('The authorities say economic misery is our only future. You must listen to authority. You must never question authority. Only evildoers challenge the dictates of authority.')

You know that the reason we have to spend all that money is because the Americans are purposely allowing people to "invade" our country by walking across or taking taxis to a dead end street then walking across to Canada. No security needed there huh. I bet if one person from Canada tried to walk across into America there would be a huge swarm of American security rush the area immediately. They MUST be watching all the people on their side crossing so as long as the brown and black people are leaving America they won't step in . That is why he is racist.