The Greening of America - A Better Way to Say "Goodbye"


Washington has just become the first state (or province for that matter) to permit the composting of human remains.  Instead of having to go up in smoke or uselessly interred in the ground, creating all sorts of environmental problems, loved ones will be able to have the departed transformed into compost for human recycling.

Naturally, the Catholic church has denounced human composting as sacrilege but they would, wouldn't they?


“Recomposing” a body, as explained by news reports, means putting a corpse into a shroud filled with organic material (e.g., alfalfa, straw or wood chips) into which air is pumped to “accelerate microbial activity” and break down the remains (in about a month) into a cubic yard of “compost” to use in your backyard. Just to make sure that you don’t infect the flower bed, the temperature generated by the microbes must reach 131°F (55°C) for 72 consecutive hours to kill off pathogens.

Advocates of “recomposition,” include Katrina Spade, a Seattle designer and self-described “eco-death revolutionary” who founded “Recompose,” a “public benefit corporation” that could make $5,500-per-human mulching if Pedersen’s bill passes. Spade calls the process an “environmental and social-justice issue” that expands “choice” about death and affords a “meaningful” alternative to burial or cremation.

As we finally pry loose the religious grip on burials we may entertain other ways of disposing of grandpa. How about taking the kids to the park to visit great-grandfather.  That could actually happen thanks to a little Italian creativity that produced the capsula, an egg-shaped burial pod in which body nutrients are used to grow a tree. 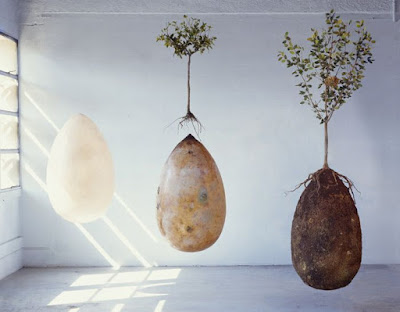 What would be better - visiting a living tree or staring at a granite slab?
Posted by The Mound of Sound at 11:36 AM

The sea... how about taking kids to the seafood stall to eat great-grandfather. That is the best solution, bar none.

Ehhh, the Catholic church should consider the potential here: Getting the faithful to pay for priest house calls to consecrate the land you're putting the compost in. Afterwards, the church doesn't have to worry about upkeep either--it's win-win! Could be almost as good a racket as selling indulgences.