Help, Barbarians at the Gate!! 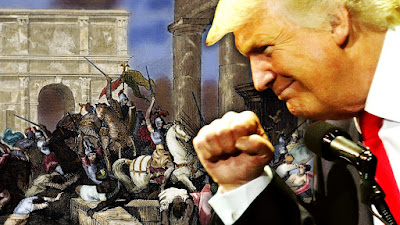 I just realized that, from British Columbia's eastern border, the barbarians are in control all the way to Quebec.  Scheer and Kenney, Moe, Pallister and Ford. Two thousand miles of knuckle-draggin' mouth breathers. We don't need pipelines. We need a wall.

Public intellectual and McMaster prof, Henry Giroux, has a few ideas on how to drive back this tide of velvet-glove fascism.

Something sinister and horrifying is happening to liberal democracies all over the globe. Democratic institutions, such as the independent media, schools, the legal system, certain financial institutions, and higher education are under siege worldwide.

...Two worlds are colliding: First, as a number of scholars have observed, there is the harsh and crumbling world of neoliberal globalization and its mobilizing passions that fuel different strands of fascism across the globe, including the United States. Power is now enamored with amassing profits and capital and is increasingly addicted to a politics of white nationalism and racial cleansing. Second, as Charles Derber argues in Welcome to the Revolution, there is the world of counter movements, which is growing especially among young people, with their search for a new politics that can rethink, reclaim and invent a new understanding of democratic socialism, untainted by capitalism.

...Education, both in its symbolic and institutional forms, has a central role to play in fighting the resurgence of fascist cultures, mythic historical narratives and the emerging ideologies of white supremacy and white nationalism. Moreover, at a time when fascists across the globe are disseminating toxic racist and ultra-nationalist images of the past, it is essential to reclaim education as a form of historical consciousness and moral witnessing. This is especially true at a time when historical and social amnesia have become a national pastime, particularly in the United States, matched only by the masculinization of the public sphere and the increasing normalization of a fascist politics that thrives on ignorance, fear, hatred, social cleansing, the suppression of dissent and white supremacy. Education as a form of cultural work extends far beyond the classroom, and its pedagogical influence, while often imperceptible, is crucial to challenging and resisting the rise of fascist pedagogical formations and their rehabilitation of fascist principles and ideas.

Against a numbing indifference, despair or withdrawal into the private orbits of the isolated self, there is a need to create those cultural apparatuses and formative cultures that do the pedagogical work of promoting civic courage, fostering the capacity to listen to others, sustaining complex thoughts and engaging social problems. We have no other choice if we are to resist the increasing destabilization of democratic institutions such as those regulatory institutions that provide for people’s basic needs and their personal and political rights. In addition, there is also the need to resist the increasing assault on reason, the collapse of the distinction between fact and fiction, and the taste for brutality that now spreads like a plague across a number of countries, including the U.S.

This made me feel better, hope it does the same for you.


Thanks for the link, Rumley. Every little bit does help. I do hope Dyer's take is borne out over the next several years or, as he notes, the EU may be lost.

“Political freedom and escape from tyranny demand that individuals not be unreasonably constrained by government in the crossing of political boundaries. Economic freedom demands the unrestricted movement of human as well as financial capital across national borders.”

We got the stupid buggers to go for that one. Now let’s hit them with “economic nationalism” and watch their heads spin. If they want to colour it white, then we don’t care.

Do NOT let other cultures destroy it!!!

Any idea where I can find a karaoke version before George Soros replaces it with mongrel music?

Call it “amnesia” if you want to, but we know better. They bought “economic freedom” without knowing what was in the package; those “rugged individualists” will buy this shit too. They never knew enough about anything to qualify for amnesia. And now they’re dumber than ever.

I know what we’ll do next: we’ll tell them everybody else is a Marxist and sell them tee-shirts. Yuk – yuk – yuk. I haven’t had so much fun since the pigs ate my brother.

Liberal thinking has given a certain amount of consideration to human beings and in Canada documented in our "Right and Freedoms". Imagine what these shoe lace people have in mind for the future. We must bet rid of "Free Capitalism"..it is the demise of the human race and what has caused Climate Change or Climate Deviation call it what you want. The masses have been led down the "Garden Path" until now. It isn't difficult to realize that this brand of so called governance is to reduce education so the masses are once again reduced to blubbering idiots within the "Feudal" System. Anyong
]

We already are blubbering idiots. They had that one licked years ago. We're just waiting for them to advise us that the system has been formally institutionalized.

maybe the shift to the right is wishful thinking?

The same goes for Venezuela.


The type of disorder occasioned by climate change fits nicely into several niches including authoritarianism and disaster capitalism. Look for democracy to be reined in, rights and freeedoms curtailed.

The climate crisis was born out of unbridled capitalism and the chaos it has created is abundant in opportunity - unless it is stopped. I expect that reality plays some role in the fact that our political parties, the lot of them, won't consider shutting down our fossil fuel economy or even cleaning it up.