Cutting Jody Down to Size 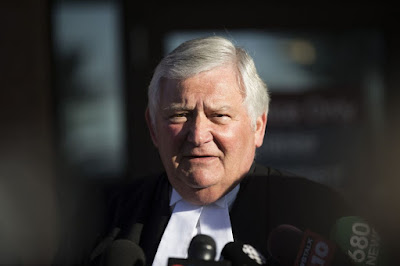 A fresh and immensely persuasive voice on former justice minister Jody and her role in the SNC-Lavalin case undermines the at times self-righteous claims of Wilson-Raybould and her supporters.

The voice is that of a legend among Canadian lawyers, Brian Greenspan, who questions whether J W-R really understood her role as attorney-general. With a 45-year career as defence counsel in many high-profile cases, Greenspan's voice carries a lot more weight than most.

Every decision to prosecute, every application for bail and every sentence imposed on a convicted offender engages a consideration of the public interest. As well, the public interest is a vital consideration in resolution discussions which routinely take place in private settings, often in teleconferences, frequently in direct personal meetings, but never surreptitiously recorded. When I wasn’t satisfied that a Crown had fairly or properly evaluated my submissions, I would, on occasion, resort to further meetings with supervising prosecutors. If I concluded that legal principles or mitigating circumstances had been ignored and that the path to resolution had not been exhausted, I might arrange a meeting with an assistant deputy attorney-general or, on rare occasions, with either the attorney-general of the province or the attorney-general of Canada. This process does not challenge independence; it ensures its vitality.

If an attorney-general can receive such vigorous advocacy and remain objective, then certainly her objectivity can also withstand collegial conversations with government colleagues and bureaucrats in which they share their views and opinions on the merits of a prosecution. Thoughtful reconsideration and sober second thoughts do not threaten the independence of the attorney-general nor do they jeopardize the integrity of our justice system.

The DPP is expressly mandated to notify the attorney-general if a case “raises important questions of general interest.” The conviction of SNC-Lavalin would affect thousands of people, including employees, pensioners and shareholders who were innocent bystanders to the alleged wrongdoing. In fact, one of the key underlying objectives of remediation agreements is to reduce the collateral negative consequences to those not engaged in the wrongdoing. The DPP fulfilled her responsibility to notify the attorney-general, recognizing that this case raised important questions of public interest. However, rather than address, assess or weigh the competing positions, the attorney-general appears to have reflexively deferred to the DPP and abdicated her responsibility for vigorous and independent oversight.

Well, Greenspan would say that, wouldn't he?

I've never quite understood how it is we have developed a system where some not necessarily very bright judge has essentially ultimate powers to decide a citizen's fate - I'm speaking of contempt of court. You can get to sit in a greybar hotel until you change your truth-set mind is a power I deplore. That's the way aristocrats wanted things centuries ago and it's still in force. I'm sure it's all second nature stuff to lawyers who never reflect much on the system itself, but merely work within it. Personally, I see no reason whatsoever I should submit to a dunderhead's opinion, and I've seen enough doltishness at first hand as an expert witness to thoroughly piss me off. Witnesses lie through their teeth with impunity, because all the defence lawyer has to ask is "Is there any possibility at all xyz could have happened?" Of course there's a possibility a billion chimps could type a phrase that makes sense. So, off the hook the miscreants walk scot-free. Even had gloaters tackle me afterwards, people too dumb to realize I didn't work at the company pressing charges, didn't listen to my introduction, but were smart enough to rig the electricals to their advantage.

So to come to this AG thing and forgetting personalities - is the basic idea of an AG to press charges in criminal cases irrespective of social consequences, as I thought I had read was the case, OR, is it their job to let schmoozers like Greenspan come and try to change their mind when the subject matter is NOT a mere point of law? Because, since companies have bamboozled our system to pretend to be individuals and many have huge monetary resources to expend, the ability to schmooze is far easier for them than for Joe Blow in Smallsville.

The slimy excuse that innocent employees might be affected,and we've changed our executive completely and they're all former professors of ethics now, holds zero water with me. An actual person cannot fire themselves and declare they're now clean, and putting them in jail would adversely affect the innocent wife and kids and extended family and grocery supplier and Walmart, because they'd be laughed at. But the company pretending it's an individual argues just this exact point and expects a fine but no jail sentence. It's bullshit writ large, and just a legal convenience for companies, which so far as I have seen in my three score years and a bit, get away with special treatment and run our lives pretending to be individuals. If the affected employees insist on ethical conduct from their next employer, things might change for the better. As it is, sleaze perpetuates and those in power hardly ever get their knuckles rapped. I mean, does anyone expect Boeing execs now running their business chessboard in Chicago looking only at share prices/costs instead of the hands-on guys in the past who worked in Seattle, to be indicted over 300+ deaths in 737 Maxes? Nah, the responsibility muck-spreaders have been hard at work muddying the waters.

The whole legal profession is a navel-gazing one, and treatment of convicted persons never seems consistent. Whether lawyers, learned legal profs or judges themselves disagree with me is not the point - they've got it comfy lording it over the proles and hardly wish major change. The system is inbred and needs a vast overhaul. The role of AG is a major part of it in Canada

Hi, BM. I think you nailed it when you wrote, "I've never quite understood..." That's the reality of laws and jurisprudence. It's sometimes not easily understood. Even highly-educated and experienced lawyers at times struggle with the complexities and nuances that, ultimately, provide the foundations of our Common Law.

When I was a young journalist I harboured a deep distrust of lawyers. When I became a lawyer I quickly developed a deep distrust of journalists. I think we all should be grateful for the tension that exists between the two. There are countries where that doesn't happen and few of us would want to live in them.

My experience leads me to find your cynicism a bit excessive. Yes there is injustice. Yes, even in Canada there are times when you get as much "justice" as you can afford. Those failings are, however, tempered by the "norm," the mundane, ordinary cases we rarely hear about.

Echoing Churchill's famous comment about democracy, our Common Law tradition tracing back to King John at Runnymede in 1215 is far from perfect but better than the alternatives.

There was another piece of the long , sad Jody story a few days ago that got little play. Staff circulated a document about abuse of power by our distinguished ex AG. Prosecutors told how Ms.WR inappropriately pressured them to achieve the litigation outcomes she desired.

How the fallen think they are mighty.

Let's face it: this whole broohaha is a big manufactured lie designed to crush Trudeau. Certain Con political pundits are out for blood and when they announce their Con candidacy, we'll all know why it went down the way it did.

"Let's face it: this whole broohaha is a big manufactured lie designed to crush Trudeau"

Here is another piece that sheds light on the Jody affair and the disastrous state of Canadian politics .... and justice (or lack thereof)

Heavily redacted email exchanges among a dozen staffers from the Privy Council and Prime Minister’s Office, the evening before the CFIA’s public mea culpa, reveal a sense of urgency in getting the CFIA to rescind its wine labeling decision. They themselves faced heat from the Government of Israel, its Canadian lobbyists, and powerful pro-Israel members of the Liberal caucus (Members of the Canadian Parliament, in other words, sworn to uphold Canadian laws, not the ambitions of a foreign power). Among the communicants: Justin Trudeau’s Foreign & Defense Policy Advisor within the Privy Council Office. Deep-pocketed Montreal supporters in mind, Trudeau had surely asked to be kept in the loop.