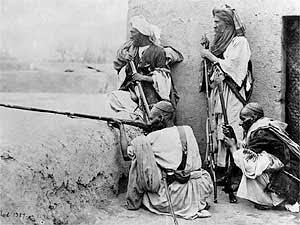 News Alert! We're not the first group to think we can overwhelm the native Afghans with our superior technology and intelligence. They've been playing this game for centuries, since the days of the ancient traders.

In the last couple of centuries these backward, impoverished, primitive and feudalistic people have driven out two British and one Soviet invasion. They've learned that, given enough commitment and willingness to sacrifice, they can easily outdo us in coping in terms of adversity, sustaining casualties over a protracted campaign, and maintaining popular belief and support for their cause. That's why they're able to boast that "you have all the watches but we have all the time."

These people aren't a bunch of Supermen. They don't have secret powers. We, like those armies that went before us, have the power, the technological powers of military sciences and weaponry. They're willing to take clearly losing odds but why? Maybe because they're about the first of the modern-age guerrillas. Maybe because they've been at this great game for so much longer than we have that they believe, truly believe, they can win this. And - maybe because they're right.

More than a century ago, this is how Rudyard Kipling wrote of Afghanistan:

If you're wounded and left on Afghanistan's plains
And the women come out to cut up what remains
Just roll to your rifle and blow out your brains
And go to your God like a soldier.
Kipling learned from these people a century ago that they play to win, so much so that they'll risk annihilation should they lose. They're willing to go twenty years, they're willing to go fifty. We can kill them off in droves but they know that new generations will follow to replace them.
Here, ask yourself this. Name the last bunch of foreigners to defeat these people. To whom did these Afghans last surrender, to whom did they accept defeat and yield? Who has conquered these people, how, and where are these conquerors now? No points for coming up with those who've merely tried.
Then ask yourself this. Who, among the generals, who keep drifting in and out of this counter-insurgency, has had practical, hands-on experience in the field, commanding a company or a battalion or a regiment, in a successful counter-insurgency?
Far be it for me to claim these Afghans can't be defeated. They can, given enough manpower deployed over enough time under rules brutal, even barbaric enough to tame civilian and insurgent alike. But are we ready to go that far back to the time and place where their wars are fought, even today, and would we really be willing to welcome home our soldiers if we did?
Posted by The Mound of Sound at 8:45 PM