Way Out of Line 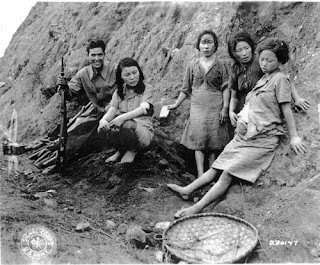 Japan's right-wing prime minister Shinzo Abe claims there is no evidence that Japan coerced Asian women into working as sex slaves during WWII. His remark flies in the face of the Japanese government's admission in 1993 that it set up and ran brothels with "comfort women" for Japanese troops.
"The fact is, there is no evidence to prove there was coercion," Abe said. "We have to take it from there."
"Historians say that up to 200,000 women, mainly from Korea and China, were forced to have sex with Japanese soldiers in brothels run by the military government as so-called "comfort women" during the war.
It's estimated that 80-90% of these comfort women were Korean girls taken forceably from their homes, given a medical check and shipped off to the brothels.