Digging Up the Dirt on Mark Sykes 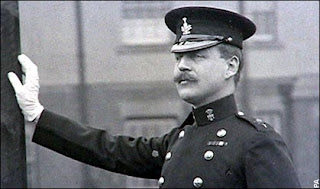 That's Sir Mark Sykes to you and me and scientists are hoping he can give them critical insights in the fight against bird flu and other pandemics - 90 years after Sir Mark succumbed to the Spanish Flu epidemic in 1919.
The focus has fallen on Sir Mark because he was buried in a lead-lined coffin. Researchers hope the coffin has allowed the body's DNA to remain intact.
Researchers, "believe analysis of Sir Mark's genetic material could uncover new information about the H1N1 virus which killed him, and help to develop drugs to fight modern forms of the disease such as bird flu (H5N1)."
Posted by The Mound of Sound at 12:45 PM