"Quickly"? Is He Joking? 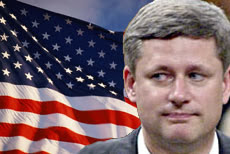 Enviromin John Baird says Canada is going to move "quickly" to regulate pollution from all industrial sectors. That's a promise vague enough to sail an oil tanker through.
"Regulating" pollution isn't necessarily the same as reducing it or eliminating it. The US also regulates pollution and, under its regulations, GHG emissions are expected to increase 20% over the coming decade. That doesn't mean they're not regulating, they are. We've been given plenty of notice that Harpo's bottom line is also "intensity based" regulation, so we too are going to regulate possibly hefty increases in our already excessive GHG emissions.
The other little Harpo dodge came straight from the mouth of our Furious Leader: "We are working through the Kyoto [protocol] process to try and get international action ... that will involve all of the world's major emitters, and as you know, currently, most of the major emitters are not part of the protocol or at least have no targets under the protocol. So these are efforts that are important that we will continue to work on."
So, we're going to "try" to get international action and, after all, you can't blame us if China and India and the US don't hop on board, right? Those are weasel words, weasel talk, something Harpo has in abundance.
The international answer to fighting global warming has to be found in one place, the World Trade Organization. We need to change WTO rules to permit carbon taxes, a form of tariff levied against the exports of those countries that will not act responsibly to cut - as in actually reduce - their GHG emissions in accordance with scientific recommendations. Nations that don't should be penalized, hit in their pocketbooks, while nations that do should be rewarded. Make it a paying proposition and you'll quickly find meaningful global warming initiatives universally embraced. If someone has a better solution, I'd love to hear it.
You'll know Harpo is serious about international action and not merely using it as a dodge when he comes out strongly in support of carbon taxes. Don't hold your breath.
Posted by The Mound of Sound at 9:28 AM

Want the Liberals to lose the next election - support a carbon tax.

I always laugh when a Lib mentions Kyoto - 8 years - 6.5 billion dollars and what was the result? A HUGE increase in GHG! Thanks for the snicker!

8 years? Okay, Jeff, where did you get that? Tell me, when did Parliament ratify Kyoto? It's only 8-years in a very muddled mind.

As for the election, this goes far beyond politics. Eventually Canadians will want this sort of effective measure, Alberta or not. It's just a matter of time.